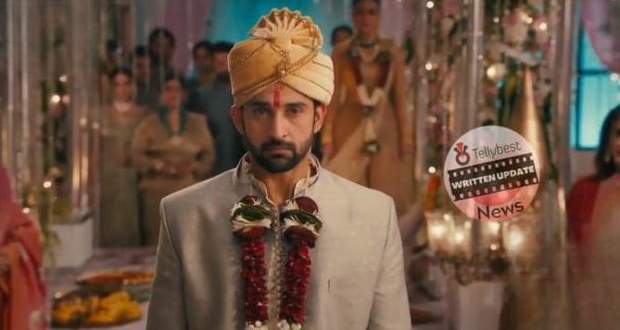 Meanwhile, Swara and Mukund dance romantically but she brings Sia in between and he leaves furiously.

Later, Urvashi tells everyone about Arjun's proposal to her with a heart-shaped cake and everyone teases him.

On the other hand, Rajjo misses Thakur's family and her friend advises her to call him but she thinks Arjun must be busy in his Sangeet.

In Thakur's house, Chirag and Kalindi dance and advise Arjun to run from his marriage with their dance performance.

In the cottage, Rajjo gets shocked to see Vicky and his friends drinking alcohol and flirting with girls.

She confronts Vicky to stop drinking but his female friends forcefully make her drink alcohol.

Seeing the bad behaviour, Rajjo's friend runs away leaving her alone while she stands in between Vicky and his friends.

In Thakur's house, Arjun and Urvashi dance romantically to the song "Kesariya".

In Temple, Manorama is praying to the idol to bless her daughter's wedding ornaments.

Later, Arjun picks up Rajjo's video call and runs to a deserted corridor.

Seeing Rajjo's face, he gets happy but gets shocked when Rajjo says she misses him every day.

She shows him her dress and Arjun compliments him for looking beautiful.

Meanwhile, he asks him why is talking so delusionally and Rajjo tells him she's dizzy.

Arjun's eyes fill with tears when Rajjo asks him if he misses her.

He tells her he misses her so much and Rajjo says why he always fights with his family for her.

Continuing her drunk banter, she asks Khan Babu if she holds a special place in his heart and if he also calls her "Meri Rajjo" like she calls him "Mere Khan Babu".

Meanwhile, Arjun desperately asks why she misses him.

However, she tells him she doesn't know and requests him to take her away as she doesn't like it at Vicky's house.

At the same time, Rajjo gets dizzy and loses consciousness and shows Arjun a glimpse of Vicky's party.

Cutting the call, Arjun informs Chirag about Rajjo's state and decides to go to save her.

© Copyright tellybest.com, 2022, 2023. All Rights Reserved. Unauthorized use and/or duplication of any material from tellybest.com without written permission is strictly prohibited.
Cached Saved on: Monday 21st of November 2022 06:58:40 AMCached Disp on: Thursday 1st of December 2022 02:27:51 AM