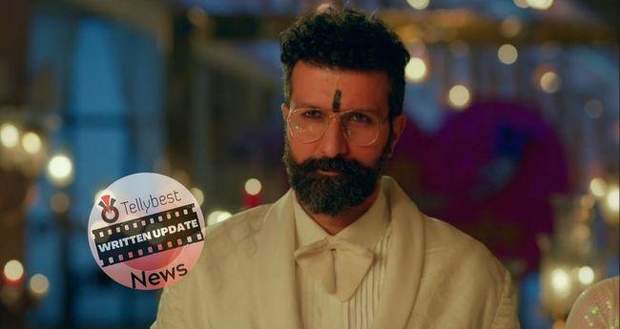 Today's Rajjo 30th August 2022 episode starts with Arjun getting shocked at finding Rajjo in the suitcase while Urvashi keeps flirting with him on call.

Arjun disconnects the call with Urvashi and urges Rajjo to get out of the suitcase and answer him about how she reached here.

However, as soon as Rajjo stands up, she loses her balance and falls on Arjun as they both get covered by a white sheet.

Further, Arjun questions Rajjo who apologizes to him and reveals to him how she reached Lucknow.

Arjun gets shocked as he hears Rajjo reciting how she entered the house and sees his and Urvashi's private moment.

Rajjo keeps talking while being distracted when Arjun stops her and insults her and tells her that she came there to suck his blood.

However, Rajjo stands up for herself saying that she was helpless and had to find her mother anywhere.

Rajjo apologizes to Arjun and brushes past him telling him that she didn't come there to suck his blood.

As soon as Rajjo reaches the balcony and jumps, Arjun holds the cloth and stops Rajjo from going downstairs.

The rain soaks both of them as Arjun tells the stubborn Rajjo that he will not let her go anywhere and pulls her back up.

Rajjo scolds Arjun for stopping her while he tells her that he stopped her because it's midnight and that she is not safe there.

At the same time, Arjun's mother is on her way to Arjun's room.

Rajjo requests Arjun to help her find Manorama while Arjun tells her to sleep in for the night and to not make a noise as they will look for her mother first thing in the morning.

Meanwhile, Madhu is on her way to Arjun's room to give him medications but gets stopped by Chirag who informs her that Arjun has already taken his medicines.

Seeing the look on Madhu's face, Chirag says that he knows she doesn't believe him to which Madhu says that she did believe him once.

Chirag feels guilty while Madhu keeps talking about the day that his drunk driving caused an accident that ruined Arjun's life and blames him for it.

Madhu calls Chirag selfish and tells him to do what does the best and that is to drink away his emotions after which she leaves.

Back in Arjun's room, Rajjo tells him that no one will find her while he tells her to go and take a shower.

Rajjo removes the shawl from her body and leaves it to dry while she gets fascinated by the huge bathroom.

On the other hand, Arjun can't bear the smell and throws the shawl from the balcony into the garbage can.