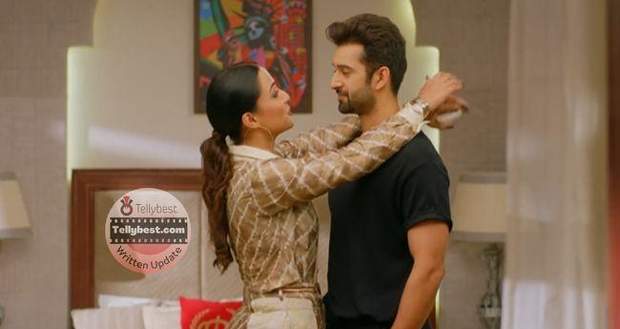 Today's Rajjo 30th November 2022 episode starts with Arjun snatching a dupatta from Rajjo who is ironing it.

Rajjo rebukes him for undoing her hours of work.

Arjun puts on a tape on Rajjo's lips when he misunderstands Rajjo’s reference to iron as woman and tells her that woman takes advantage of men and instigates them against their families and drives them away from them.

Rajjo begins to laugh uncontrollably while Arjun gets agitated and asks her why is she laughing so much.

Later, he peels off the tape from Rajjo’s lips with a jolt and tells her now they are even because he felt the same pain when she did this to him.

Meanwhile, Rajjo tells her that she was talking about the iron and not the woman.

Arjun feels embarrassed while Rajjo continue to laugh and tells him to leave.

However, Arjun pulls her towards him to stop her laughing and forgets himself in her eyes.

At the same time, Urvashi comes there and gets angry to see them lost in each other and later observes her dupatta on fire.

Arjun comes out of the trans and put off the fire and asks Rajjo if she is alright.

Urvashi gets jealous and tells Arjun that Rajjo is fine and happy because her dress is burnt and spoiled as she wants.

Meanwhile, Urvashi gets a message from the money lender reminding her about keeping the money ready in the evening.

Just then Arjun comes to Urvashi to talk to her but she keeps the door closed and thinks that she might die of a heart attack seeing Rajjo and Arjun’s drama while moneylenders threaten to put her neck in a noose.

Meanwhile, Pushkar instructs the nurse to give Manorma medicines.

After a while, Manorama recognises Pushkar’s hand in medicine and drops the medicine so she does not have to eat it.

Pushkar looks angry at Manorma’s smartness and decides to find another way to make Manorma eat the medicines.

Later, Rajjo patches the Dupatta for Urvashi and brings it to Arjun.

However, Arjun tells her that Urvashi will not wear patched clothes at her wedding.

Rajjo mocks the tradition of rich people's intake of marriage where everything is about money and status and has no space for love and feelings.

On hearing a snide comment, Rajjo tells Arjun that soon she will find another target for herself and become rich just as she has always hoped.

Meanwhile, Rajjo comes to Manorma crying her out about Arjun's hurtful words.

Rajjo hugs Manorma and complains to her about Arjun taking her wrong and asks her to tell him how she came here to repay him by saving him from Urvashi.

Rajjo cries bitterly and asks Manorma to get better soon and tells her what has she done wrong and that Arjun hates her a lot.

Just then Pankhudi comes to call Manorama out.

Outside, Pushkar has laid a trap for Manorma as Madumalti asks Manorma to take the medicine. Jhilmil and Chirag also insist while Manorma is in dilemma.

She decides to take the medicine but not swallow it however, Pushkar knows Manorma and asks the nurse to check inside her mouth to make sure whether she has eaten the medicine or not.

On being asked Urvashi tells him that her father has done something that has her worried and she has no one but him to ask for help.

© Copyright tellybest.com, 2022, 2023. All Rights Reserved. Unauthorized use and/or duplication of any material from tellybest.com without written permission is strictly prohibited.
Cached Saved on: Wednesday 25th of January 2023 01:37:28 PMCached Disp on: Tuesday 7th of February 2023 12:02:57 AM