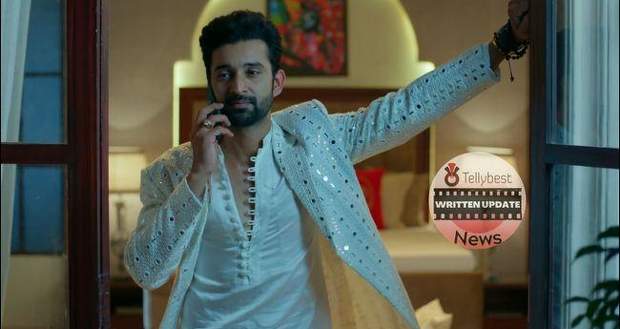 Today's Rajjo 31st August 2022 episode starts with Rajjo shouting for Arjun as the taps are not working in the bathroom.

Arjun realizes that she must not know how to use them and gives her instructions from outside the bathroom.

However, Rajjo burns herself with hot water and cries. Hearing that Arjun rushes inside.

Arjun teaches her how to start and close the tap and goes to get another pair of outfits for her.

Meanwhile, Jhilmil is trying to convince Madhu to forgive Chirag as he is suffering till now from the mistake he made on the day of the accident.

Madhu tells her that she doesn't hate Chirag but hates that he is wasting away his second chance at life by drinking alcohol with the kidney that Arjun gave him.

Madhu cries saying that Arjun couldn't go back to London because of that.

Further, Jhilmil cries to calm her and requests her to think about hiring Mukund in the family business.

At the same time, Arjun goes to his sister's room and manages to convince her to give him one of her outfits by making up an excuse and leaves while taking a tray of cupcakes with him.

However, as Arjun enters the room, he gets confused seeing water bubbles and Rajjo tells him to she did to distract herself from the hunger.

Into the night, Rajjo lies on the sofa to sleep but Arjun scolds her and tells her to sleep on the bed while settling himself on the sofa.

Elsewhere, Manorama is on her way to Lucknow on a bus.

The next morning, Arjun brings tea for Rajjo while he sees that she's about to fall from the bed and rushes to save her.

She gets shy while he hands her the cup of tea and tells her to freshen up.

She shares the tea with him when she notices that her scarf is missing.

Rajjo starts getting hysterical when Arjun calms her and informs her that he threw it in the dustbin when last night as it was smelling profuse.

Just then they hear the sirens of the garbage collecting trunk and Rajjo rushes to the balcony and jumps from there to save her mother's scarf.

Arjun thinks that Rajjo has gone insane and rushes out of the house to find her.

However, as he reaches outside he sees Rajjo emerging from the garbage truck holding the scarf like a trophy.

Afterward, Arjun scolds Rajjo and calls the scarf worthless when Rajjo stops him and tells him that it cannot be worthless since it belongs to her mother.