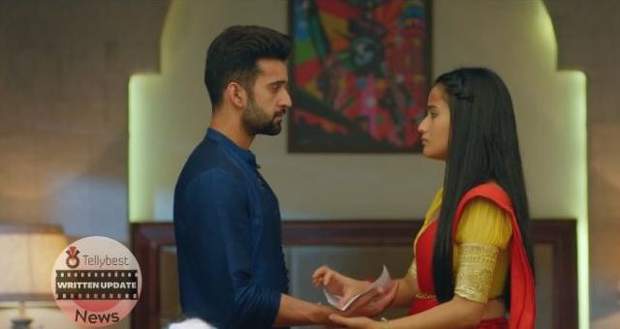 Today's Rajjo 31st October 2022 episode starts with Rajjo showing the cake to Arjun and telling him that she mistakenly overheard his conversation with Sagar.

Rajjo makes a face mentioning Urvashi while Arjun tells her that it's a bad thing to eavesdrop on someone.

Rajjo apologizes saying that it was a mistake and tells him to eat the cake knowing he has to take medicines too.

He asks her how she knows about the medicines while she reminds him that she used to live with him in the room and acts like him.

Further, Rajjo walks into his room and puts the cake on the table while telling him to eat or else she won't be able to sleep.

Elsewhere, Kalindi tries to escape from the room but Chirag wakes up and asks her where she is going.

However, Kalindi says that she is going to have something to eat and leaves the room while Chirag has an unconvinced look on his face.

Back in Arjun's room, he notices the mattress and questions Rajjo about it thinking she's planning to sleep outside his door.

Rajjo however denies it and clarifies that she took the mattress to take it to her room since the one she had previously is torn.

As Rajjo is leaving, Arjun asks her if she wants to tell him something recalling the moments she took the money.

Rajjo asks him what he means and he asks her where she goes so early in the morning.

Not wanting to reveal her job and Manorama's condition, Rajjo tells Arjun that he must be hungry and brings the cake to his face.

However, he holds her hand as they hold eye contact intensely.

Rajjo gets clustered and leaves the room telling Arjun that she has left already when he tells her to go to her room and sleep.

Meanwhile, Madhu shifts in her bed as she keeps recalling the fire incident when her husband wakes up and realizes Madhu's worry seeing her expression.

He tells Madhu to not curse at Rajjo for the day since their son is alive because of her.

Madhu says that she knows but she worries that Arjun might go back to being sincere to Rajjo and being trapped in her plan.

He calms her saying that they will go through everything together and jokes by asking her if he should give her a foot massage.

Later, in the early hours of the day, Rajjo walks aimlessly in the hall when she sees Kalindi coming out of Rocky's room.

Kalindi makes up an excuse Rajjo leaves believing the lie.

Later, Arjun follows Rajjo who meets up with two men.

Rajjo asks those men who they are and the men tell her that the manager sent them to give her the bonus early.

However, it is all an elaborate plan of Urvashi as she clicks pictures of Rajjo taking the money.

Rajjo calls Chachaji and tells him that she is coming as she has gotten the money.

Urvashi sends the video to Pushkar while he scolds her as he reveals that Rajjo is collecting money for her mother who is in the hospital.

Pushkar informs Urvashi that Arjun will sympathize with Rajjo once he learns the truth.

Elsewhere, Arjun follows Rajjo while he wonders why she's running and not taking an auto rickshaw when she has the money.

© Copyright tellybest.com, 2022, 2023. All Rights Reserved. Unauthorized use and/or duplication of any material from tellybest.com without written permission is strictly prohibited.
Cached Saved on: Monday 21st of November 2022 06:08:29 AMCached Disp on: Wednesday 7th of December 2022 04:03:02 PM