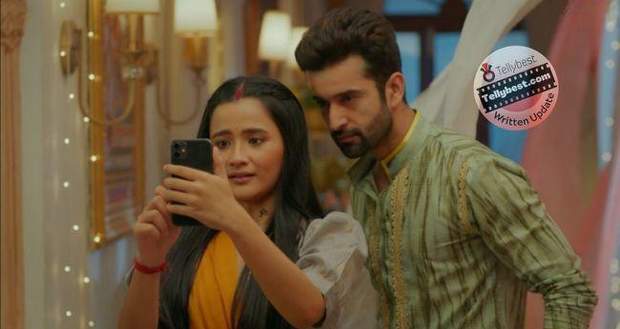 Today's Rajjo 3rd December 2022 episode starts with Urvashi opening the gift and getting scared seeing the feather of a crow.

Arjun makes weird body movements and tries to signal her to remove her dupatta.

Rajjo ignores Arjun so he aims a rose at her head and she realizes what he is saying.

Frustrated, Rajjo opens her dupatta and swirls it on the candle flames intentionally.

Arjun walks to her and Rajjo states she is over him and will find someone new.

At the same time, the moneylender tells Urvashi that her lover paid the amount to her not the groom.

At the entrance, Naman enters the Thakur mansion and crashes with Rajjo.

He holds Rajjo’s forearm while Arjun recalls Rajjo’s words and asks Naman to leave her hand.

Naman hugs everyone and meets the whole family lovingly while Urvashi looks at him shocked.

Madhumalti orders Rajjo to bring Naman’s luggage and take it to his room.

On the other hand, Manorama is walking the corridor dizzily when Pushkar and Kavita are searching for her everywhere.

Sia shows her remorse about Urvashi marrying Arjun and states she only wants Rajjo as her Chachi.

Afterwards, Rajjo sees Naman and Urvashi sneaking from the function and follows them.

Rajjo stands at the threshold and Manorama lies on the other side unconscious.

On a secluded road, Naman tells Urvashi that he saved her by clearing her loan.

He reminisces how Urvashi refused him when Arjun’s bank statement fell on the floor back (means Arjun got rich) in his college days.

Urvashi exclaims that she will marry Arjun even if he cleared her debt while Rajjo is watching them hiding behind a car.

In Thakur mansion, Manorama walks into the house and Rajjo, Urvashi and Naman run back to the house hearing the commotion.

Manorama orders everyone to shut up and listen to her in a drunken voice and halts the event.

Everyone glares at Manorama while Rajjo and Chirag hold her and he offers her water.

However, Manorama declares that she wants to tell everyone the truth.

© Copyright tellybest.com, 2022, 2023. All Rights Reserved. Unauthorized use and/or duplication of any material from tellybest.com without written permission is strictly prohibited.
Cached Saved on: Wednesday 25th of January 2023 07:12:33 PMCached Disp on: Thursday 9th of February 2023 05:12:16 AM