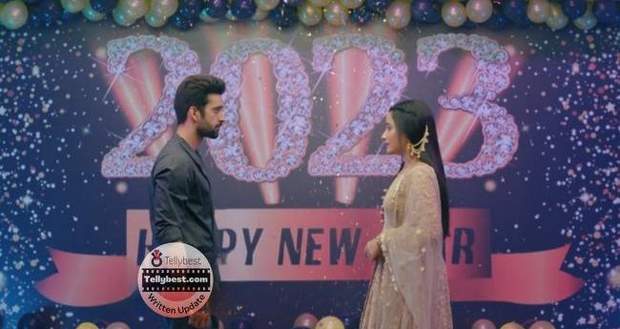 Today's Rajjo 3rd January 2023 episode starts with Arjun telling Rajjo that she might not want to come on honeymoon with him as she knows the real meaning of it.

Later, Arjun and Rajjo start quibbling when Arjun does not tell her the surprise he has planned for her.

Between the fights, Arjun calls her “Biwi” and her heart flutters.

On the other hand, Chirag gives tamarind candies to Kalindi to decrease her motion sickness.

Kalindi requests Chirag to park the car on the side as she wanted to tell him something.

Chirag knows she is talking about Rocky and he holds the steering wheel tightly while Kalindi tells him that Rocky is calling her continuously like a madman.

Kalindi clears to Chirag that she wants to do nothing with Rocky and Chirag stops the car in the corner furiously.

He accuses Kalindi of not telling him before and handling all the suffering alone.

Chirag gets out of the car in order to calm down while Kalindi follows him and banters that she is afraid that Rocky might follow them to the farmhouse.

Seeing her panicking, Chirag hugs her tightly and says that she is his now and he will kill Rocky if he dares to come near her.

Kalindi requests Chirag to never leave her and he hugs her tightly assuring her while Rocky sees them from afar.

Arjun closes her mouth stating a mosquito will enter her mouth.

At the same time, Niharika descends the stairs and Kalindi and Chirag enter the house.

Niharika gives everyone roses and states that Arjun has called her here so Rajjo’s race practice does not lag behind.

Impressed by Arjun’s efforts, Rajjo moves to hug him and he also raises his arms but she stops midway realising that everyone is watching.

Rajjo scolds herself in mind while Arjun scolds her in mind, complaining about not hugging him.

Later, Niharika informs Rajjo of the training schedule while Chirag calls Arjun out in a cheeky formal way.

Chirag scolds Arjun for calling Niharika on their honeymoon and asks if he is buffalo (defeated from the brain).

He advises Arjun to try to approach Rajjo in a romantic way.

After some time, Chirag assures Kalindi that Rocky cannot enter the farmhouse because he and Arjun know the house code.

In the evening, Chirag is playing the guitar and entertains everyone with his pop beats.

Suddenly Kalindi stands up to check the door but Chirag stops her and holds her hand tightly.

Outside the farmhouse, Rocky tries to open the window of the house but to no avail as everything is looked at.

Meanwhile, Niharika and Arjun dance and she pulls Rajjo to join them.

In the end, Rajjo and Arjun do a dance performance and get lost in each other's eyes and Niharika teasingly tells them that the bedroom is located on the first floor.

In the Thakur house, Madhumalti informs Jhilmil that she wants to go to Pushkar's farmhouse where the children have gone.

In the Farmhouse, Arjun is wearing his T-shirt but it gets stuck and Rajjo gets shy seeing his bare chest.

She holds his body when he tilts to get his head out of the T-shirt opening.

Rajjo leaves him and apologizes for misunderstanding the honeymoon’s meaning and states that they do not even know what they want in the future.

Seeing Rajjo firm to go away from him, Arjun states that he will always be happy for her success.