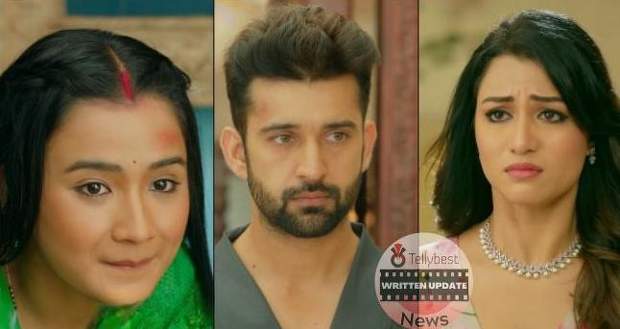 Today's Rajjo 3rd November 2022 episode starts with the family members establishing the golden pot at the temple of the household and thanking the god for saving their treasure.

Chirag tells Arjun that something feels off and wonders why Urvashi’s uncles would steal a pot if they were so rich.

Arjun remembers Rajjo’s words about Urvashi and her family being a fraud but brushes it off from his mind.

Chirag tells Arjun to question his heart and get the answer if Rajjo is really after his money or not.

While Rajjo angrily washes clothes in the washroom, Urvashi comes there and throws more clothes at her asking her if she was the one who exposed her uncle.

Rajjo says that Sheru was the one who barged at them but Urvashi understands that it was Rajjo’s plan.

Urvashi begins to tell Rajjo that she loves both Arjun and his money but Rajjo makes her go away by sprinkling soapy water.

As Urvashi comes out, she spots Pushkar standing there and asks him when he got there.

Pushkar tells Urvashi that he missed the show of her “uncles” getting caught and asks if the loan sharks are still remembering her.

Urvashi asks Pushkar to help him a bit by giving her some cash to which Pushkar agrees.

However, Pushkar warns Urvashi not to make Kalindi sad on any occasion while giving her the liberty to destroy Rajjo.

Later, Arjun comes to Rajjo while she dries clothes on the terrace and stands beside her without finding any words to talk to.

Rajjo asks Arjun what he has to say while sprinkling water violently from the wet clothes on Arjun’s face.

As Arjun asks Rajjo why she is mad, Rajjo replies that he cannot control when she should get angry while swinging the clothes roughly and hurting her eye.

Arjun asks Rajjo to stand still, blows into her eyes, and then leaves in a hurry.

Urvashi watches the scene and burns in anger on seeing Arjun close to Rajjo.

Kalindi almost slips while walking but Chirag saves her by holding onto her.

Rocky sees them together and intentionally interrupts with his eyes fuming anger and jealousy.

Later, Rajjo learns about the doctors shifting Manorama to another place for physiotherapy from Kaka and decides to visit.

Arjun tells Urvashi that Rajjo earns money by diligently working as her mother is admitted to the hospital.

Just then, Rajjo leaves the house with a tiffin box which makes Arjun realize that she is going to visit her mother.

Arjun leaves for the hospital with Urvashi as he cannot be cruel to her just because she did terrible things to him.

Later, Rajjo arrives at the place for physiotherapy which is near the hospital, and gets to know that the treatment will cost another 2 lakhs.

Arjun gets to know from Urvashi that Manorama only visited the hospital for one day while going to the address told by the receptionist of the physiotherapy place.

© Copyright tellybest.com, 2022, 2023. All Rights Reserved. Unauthorized use and/or duplication of any material from tellybest.com without written permission is strictly prohibited.
Cached Saved on: Monday 21st of November 2022 03:22:45 AMCached Disp on: Friday 9th of December 2022 05:19:45 AM