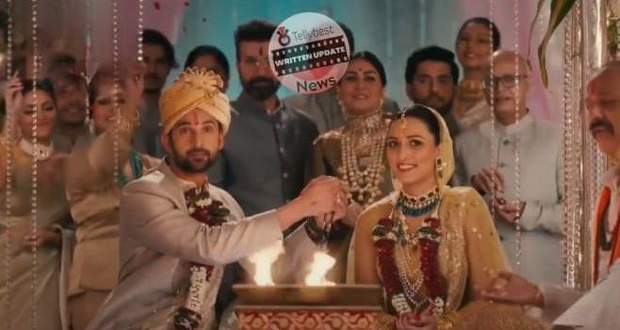 On the other hand, Arjun is confused about whether to ignore Rajjo for Urvashi's sake or go to save her.

Arjun decides to save her as he cannot bear the thought of Vicky hurting Rajjo.

Meanwhile, Chirag encourages his brother to go and gives him his spiritual necklace.

In the temple, Manorama prays to the idol to bless her daughter with happiness and let her decision of choosing Vicky for Rajjo be fruitful.

At the same time, Manorama’s mobile is ringing with Gudiya’s (Rajjo’s friend) name but she does not notice.

In the cottage, Rajjo dances in the car and stumbles while Arjun catches her and asks her if she’s okay but she doesn’t reply.

Arjun sees Vicky dancing and gets furious and kicks the speaker to stop the drunkard's party.

The music stops and Vicky watches Khan Babu shocked and Arjun takes Rajjo inside the cottage and put her on the sofa.

Meanwhile, Gudiya tells Arjun about Vicky’s friends forcefully making her drink alcohol and he asks for some curd.

Taking the curd, he requests her to go to the temple and bring back Manorama.

Meanwhile, Arjun puts a spoonful of curd in Rajjo’s mouth with his hand while she talks romantically with him.

She tells him she is jealous of him marrying Urvashi and asks if he is also jealous of Vicky.

Ignoring her drunk banter, Arjun keeps feeding her but she keeps commenting on his beauty and puts Kala Tikka behind his ear.

Suddenly Rajjo holds his collar and brings him close and asks him why he came here.

Outside the cottage, Vicky’s friends insult him for not being able to stop his bride from leaving and furious Vicky crashes the bottle on the ground.

Later, Rajjo tells him she misses him and puts her forehead on Arjun’s cheek and both breathe heavily.

Hearing Rajjo’s words, Arjun holds her waist and pulls her close and declares he is going to take her back home and that he will not stop at any cost.

Meanwhile, Vicky stands in front of them and tells Arjun he will not let him take his bride away.

© Copyright tellybest.com, 2022, 2023. All Rights Reserved. Unauthorized use and/or duplication of any material from tellybest.com without written permission is strictly prohibited.
Cached Saved on: Monday 21st of November 2022 07:11:19 PMCached Disp on: Thursday 1st of December 2022 11:53:47 AM