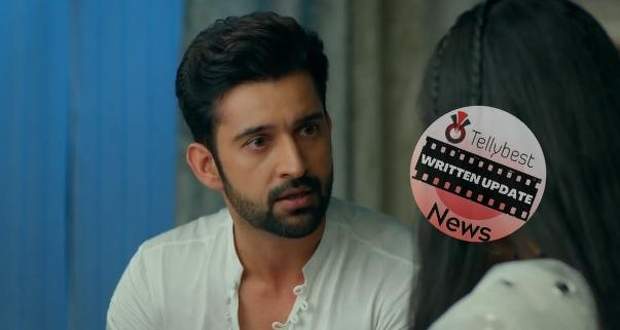 Today's Rajjo 3rd September 2022 episode starts with Rajjo managing to get away from the stairs when she bumps into Dadaji.

However, Dadaji lets Rajjo go and Arjun also goes back to his car and drives with Rajjo in the passenger seat.

Later, Rajjo gets fascinated by the hotel room and he tells her to take care of herself since she will be staying alone only.

However, the hotel manager who is there with them is eyeing Rajjo from the mirror and looking at her lustfully.

Arjun notices him and rebukes him while taking Rajjo with him.

Later, Arjun is getting angry at the traffic and shouts that girls don't know how to drive while Rajjo asks if can bear a baby for nine months and give birth to it.

Arjun gets confused but realizes that she got upset with his earlier remark and apologize to her.

Back at the Thakur house, Urvashi comes to Arjun's room to surprise him when she sees Rajjo's clothes and shouts for her family.

Afterward, Arjun apologizes to Rajjo as she has to climb up the balcony but she tells him that she is used to it by now.

Arjun gets bombarded with questions as soon as Arjun enters his room from the whole family while Dadaji comes to his rescue by saying that it could've been anyone during the flooding.

Rajjo feels grateful as the family leaves and Arjun apologizes to Dadaji for having to hide everything about Rajjo.

Rajjo also comes out of hiding and apologizes to Dadaji.

At the same time, the family members are talking to each other while Madhu tells Jhilmil to handle the kitchen duty for the day.

Kalindi tells Madhu that she thinks that something is wrong with Arjun's behavior and Madhu agrees to it in her mind.

Dadaji tells Arjun and Rajjo that he is allowing them to break the rules of the family and Arjun promises to end everything by the next couple of days.

Arjun later gets a call from Urvashi and goes to meet her who tells him that she knows why he didn't inform anyone about his plan to move back to London after their marriage to not hurt their feeling.

Arjun recalls the memory while Urvashi asks him if he is hiding something from her too.