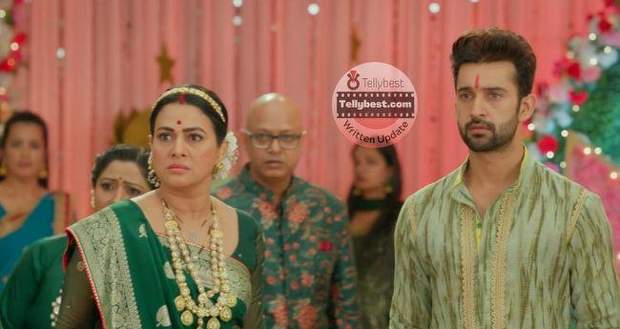 Today's Rajjo 4th December 2022 episode starts with Rajjo and Chirag trying to handle Manorama while she barely manages to stand straight in front of everyone.

Madhumalti asks Rajjo why her mother is acting like that and says that she must have drunk alcohol, making her act like a drunk.

Manorama asks Madhumalti to shut her mouth and says that nobody is making any mistakes except Arjun who cannot see who is good for him.

Pointing out how Rajjo wears mangalsutra and sindoor for Arjun, Manorama says that Arjun and Rajjo are made for each other.

Arjun silently hears Manorama while his eyes rest on Rajjo who tries to stop Manorama from babbling things.

As Madhumalti again tries to interrupt Manorama, she calls her aunty which makes everyone shocked.

Jhilmil points out that statement again and says that Rajjo’s mother is calling her an aunty making Madhumalti lose her temper.

Chirag asks Rajjo to take Manorama inside as she is causing a stir at the function.

However, Manorama refuses to move and announces that she has a truth to reveal to everyone.

Pushkar gets anxious and tries to stop Manorama but she says that Pushkar is not what he seems to be to others.

Manorama says that Pushkar is a “rangrasiya” (lustful) that stuns everyone including Rajjo.

However, before Manorama can talk further, Pushkar swiftly injects an injection into Manorama’s shoulder as he passes by her.

Manorama says that Pushkar pricked her with something but Pushkar proves her wrong by showing his empty hands.

As Pushkar asks Manorama to reveal the big truth she was babbling about, Manorama faints in Rajjo’s arms after getting a panic attack.

Arjun runs toward Rajjo to check on Manorama despite Madhumalti stopping him.

The nurse checks on Manorama’s vitals and tells everyone that the pulse is fine which indicates that she fainted due to shock or stress.

Chirag takes Manorama inside the room by carrying her while Urvashi sighs in relief as the drama is over.

Rajjo worries about Manorama and gets anxious about her condition but Chirag cheers her up by saying positive things.

Meanwhile, Madhumalti scolds Arjun for letting Rajjo and Manorama stay in their house because of his punishment.

Madhumalti warns Arjun that she will not stay silent if anything like today happens again.

© Copyright tellybest.com, 2022, 2023. All Rights Reserved. Unauthorized use and/or duplication of any material from tellybest.com without written permission is strictly prohibited.
Cached Saved on: Wednesday 25th of January 2023 12:19:31 PMCached Disp on: Wednesday 1st of February 2023 06:11:26 PM