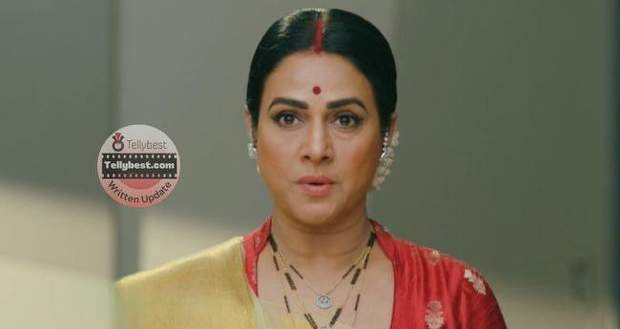 Today's Rajjo 4th January 2023 episode starts with Arjun stating his request of being Rajjo’s friend to the whole family.

Arjun proposes to Rajjo a deal of friendship and explains the terms and conditions.

Rajjo agrees to his term and condition of trusting each other and agreeing to one’s wish for anything.

Later, they sit on the bed awkwardly and Rajjo asks him about his likes and dislikes.

Arjun names his favourite beverages and he asks about the best moment of her life.

Rajjo smiles and states that when she won shoes for her Maai was the best moment of her life.

Arjun teases her as he was responsible for the best moment of her life.

When Rajjo asks the same question he states his best day was the day when he saved her in Neeltaal.

They keep talking nonstop and relax on the bed with passing time while being lost in each other's words.

In the morning, Rajjo is sleeping on Arjun’s arm and she is holding his hand tightly.

Arjun wakes up and removes his hand from her shoulder and pulls some strands of Rajjo’s hair behind her ear.

At the same time, Rajjo wakes up and her eyes meet with Arjun when she sees herself in his embrace she gets up hurriedly.

Later, Madhumalti and Jhilmi stand in the living room hoping that Arjun and Rajjo have consummated.

Arjun and Rajjo meet them while Rocky enters and greets them while she looks at him shocked.

At the same time, Kalindi enters and gets scared when she sees Rocky and he greets her creepily.

Jhilmil sends him out to bring the luggage while Arjun goes to wake Niharika up and Chirag goes out to talk to Rocky.

Meanwhile, Jhilmil checks Rajjo's face for hickeys and asks her indirectly if she consummated her marriage.

Innocent Rajjo misunderstands Madhu’s words and states she enjoyed her last night with Arjun a lot.

Rajjo states that she and Arjun stayed awake the whole night and says how tired she was but Arjun didn’t let her sleep.

Madhumalti blushes and compliments Arjun’s stamina but her illusion breaks when Rajjo says they were talking the whole night.

In the parking lot, Chirag punches Rocky’s face and warns her to stay away from Kalindi.

He orders him to not pick up Madhu’s call ever again and breaks every tie with his family.

Chirag bangs Rocky’s face on the car’s bonnet and warns him in sheer anger and shoos him away.

Inside the house, Madhu tries to persuade Rajjo and Arjun to stay in the farmhouse when Chirag states they are going home.

However, Arjun and Rajjo take the opportunity to leave the awkward atmosphere of the farmhouse.

In Thakur's house, Arjun drags Kalindi and Madhu out of the kitchen and states they will not cook today as they will play a cricket match today.

Meanwhile, Chirag walks to Rajjo who asks him about Rocky’s whereabouts.

Rajjo scolds him for beating Rocky, she is afraid that he might harm Kalindi somehow.

Chirag assures Rajjo that he has made a security arrangement in the house to refrain Rocky from entering the house.

© Copyright tellybest.com, 2022, 2023. All Rights Reserved. Unauthorized use and/or duplication of any material from tellybest.com without written permission is strictly prohibited.
Cached Saved on: Wednesday 25th of January 2023 09:58:06 AMCached Disp on: Monday 6th of February 2023 05:06:17 AM