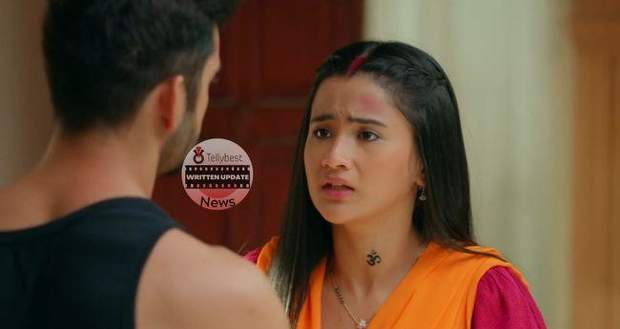 Today's Rajjo 4th November 2022 episode starts with Rajjo deciding that she will somehow arrange 2 lakhs for her mother’s treatment as she cannot leave her mother in that condition.

The nurse asks Rajjo to go back to the hospital and tells her that they will join them a bit later with Manorama.

Without thinking much, Rajjo leaves with Kaka while the doctor and nurse remove their coats and laugh among themselves.

The doctor tells the nurse about Rajjo being foolish enough to believe that they are real doctors when they are just faking it.

They place Manorama on a wooden chair, bring a table of jewelry in front of her, and wait for Arjun’s car to arrive.

Arjun speeds up after hearing Urvashi’s statement that Manorama is not a coma patient in the hospital because he believes that there is some misunderstanding.

However, as Arjun and Urvashi reach the address, they spot the fake doctor and nurse talking to Manorama while she holds jewelry in her hand.

The fake doctor tells Manorama to buy the new set with the money Rajjo sent her so that Arjun can hear it.

Urvashi rubs salt on Arjun’s open wound by saying that she never believed in the personality of Rajjo and Manorama.

As Urvashi makes Arjun believe that Rajjo and Manorama are greedy for money, Arjun decides to talk with Manorama but Urvashi stops her.

Urvashi asks Arjun not to mingle with their family and leave silently as she does not want any chaos.

As Arjun and Urvashi leave, Pushkar enters and tells Manorama that when she was healthy, he made her lifeless, and now that she is lethargic, he made her look healthy.

Meanwhile, Rajjo walks through the streets wondering what she can do to earn such a significant amount of money when she spots Shivji’s idol.

As Rajjo prays to Shivji for some way to pop out, a pamphlet flies and falls on her head with the advertisement of the Diwali race.

Rajjo reads it, gets happy to see the winning prize of 50,000 rupees, and instantly decides to register her name.

The man at the counter tells Rajjo that only people from that neighborhood are allowed to participate in that race and asks Rajjo for her full name.

Rajjo registers her name as “Rajjo Arjun Singh Thakur” and bumps into Arjun on her way home.

Back home, Madhumalti suggests Kalindi take small steps toward Chirag as he is trying to change himself for her.

Arjun asks Rajjo to retract her name from the race as he will not let her use his family’s name for her selfish means.

Rajjo refuses to do so as she needs the money for her mother’s new treatment.

Arjun tries to take back Rajjo’s name but the man at the counter leaves with the forms making Rajjo relieved.

Rajjo tells Arjun that she will run ahead of him and win the race for Manorama.

© Copyright tellybest.com, 2022, 2023. All Rights Reserved. Unauthorized use and/or duplication of any material from tellybest.com without written permission is strictly prohibited.
Cached Saved on: Monday 21st of November 2022 08:41:32 AMCached Disp on: Thursday 1st of December 2022 02:57:16 AM