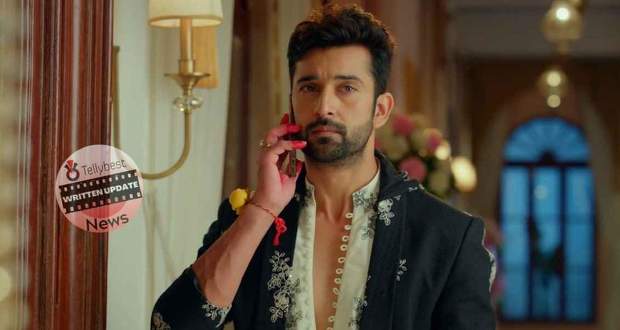 Today's Rajjo 4th October 2022 episode starts with Arjun ordering Vicky to get aside as Rajjo does not want to live here anymore.

Vicky accuses him of holding his fiance in his arms and says he loves Rajjo as she is his childhood love.

Meanwhile, Arjun insults Vicky by saying he doesn’t deserve to marry any girl as he watched his friends forcefully made her drink alcohol and Rajjo says “shoo” to Vicky.

Hearing Rajjo’s words, Vicky gets angry and kicks Arjun’s stomach making him lose his hold on her.

Angry Arjun goes to him but Manorama is standing in front of him and watches him shocked.

Vicky blames him for holding Rajjo in his arms and tells Manorama that he was trying to take his fiance away from here.

However, Manorama sends Vicky out as she wants to talk alone with Khan Babu.

Later, she asks Arjun why he has come here leaving his own wedding rituals but he tells her about Vicky’s disgusting actions.

He tells her about the call in which Vicky’s friends were forcing haldi on her.

Arjun tells Manorama he found Rajjo on the car rooftop dancing drunk while her fiance was dancing in the corner.

After listening to his words, Manorama tries to defend Vicky’s behaviour as child play but Arjun calls his actions shameless.

She gets angry when Arjun continually accuses Vicky’s character and she asks him if he was present here when all the events happened.

Defeated by her logical thinking, he accepts he was not here when everything happened.

She tells him that Vicky is Nangu Kaka's son so she trusts him but Arjun tells her that Kaka’s good actions do not define Vicky's innocence.

Later, Manorama orders Arjun to go away from Rajjo’s life forever and advises him to not hold the hand that he cannot hold for his life.

In Thakur’s house, Urvashi finds Arjun missing and accuses Kalindi of telling him the truth about Rajjo’s fiance.

On the other hand, both Manorama and Arjun join their hands in farewell and he leaves after gazing at Rajjo for the last time while she requests him to stay.

In the early morning, Urvashi complains to Madhu about Arjun being missing from the house.

On the other hand, Arjun stops his car at the police barricades and the police officer recognises him.

He tells Arjun about his superior officer threatening not to tell him about Vicky but nonetheless, the police officer tells him about Vicky being a human trafficker who sells girls to different foreign countries.

© Copyright tellybest.com, 2022, 2023. All Rights Reserved. Unauthorized use and/or duplication of any material from tellybest.com without written permission is strictly prohibited.
Cached Saved on: Monday 21st of November 2022 05:34:16 PMCached Disp on: Tuesday 6th of December 2022 12:32:16 PM