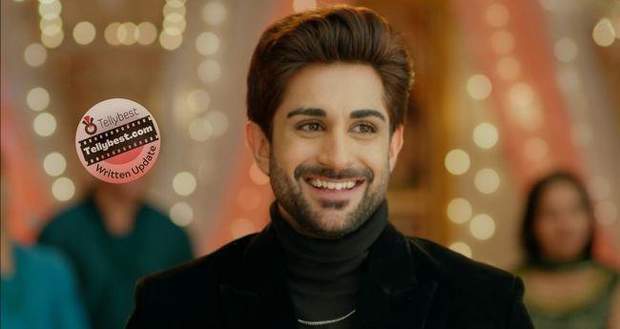 However, Rajjo denies Arjun’s accusations and defends her mother.

Rajjo tells Arjun that she was doing her chores and she was busy making Urvashi’s videos in the remaining time.

Frustrated Arjun taunts Rajjo that if something happens to Manorama then she is to blame only and walks away.

Rajjo wipes her tears and agrees with Arjun’s taunts and realizes that Urvashi has something to do with Manorama.

In Manorama’s room, Chirag confronts the nurse who is taking care of Manorama.

He runs to her side while Pushkar tries to find a way to talk to the nurse and refrain her from revealing the truth.

Meanwhile, in the living room, Rajjo is following Urvashi and Naman out of the house and Chirag meets her mid-way.

Rajjo orders Chirag to go with her and support her like always.

In a secluded corner, Naman gives a chance to Urvashi to choose him over Arjun and confesses his love.

Naman claims that he knows everything about her and holds her shoulder delicately.

Meanwhile, Rajjo and Chirag are searching for Naman and Urvashi suddenly Chirag hears Kalindi’s moaning and looks up.

Chirag gets shocked to see Kalindi in Rocky's arms who is eating out her neck on the balcony sensuously.

Heartbroken Chirag recalls all the excuses Kalindi made before and falls to his knees with eyes full of tears.

Meanwhile, Naman and Urvashi hide behind the car and watch the events.

Chirag's heart fills with anger and he runs towards the house gate to confront Rocky for daring to touch his wife.

He runs to the corridor where Kalindi and Rocky are romancing and grabs Rocky’s collar.

Kalindi starts crying and begs Chirag to stop but he beats Rocky.

However, Rocky apologizes to Chirag and he accuses Kalindi of trapping him.

Rajjo stands in between Chirag and Rocky and stops them from fighting while Rocky runs away.

In Manorama’s room, Manorama wakes up and Pushkar happily exclaims that her memories are back.

Pushkar taunts Manorama that she revealed her facade of losing memories herself.

Manorama gets shocked and calls for Rajjo to keep her act of losing memories.

However, Pushkar tells her to shut her mouth and informs her that everyone hates her for destroying the function.

In the corridor, Chirag takes the support of the wall and gloomily asks Kalindi for the reason for her adultery.

Chirag blames Kalindi for not understanding his love and killing it intentionally.

Kalindi falls on the ground crying and looks towards the floor embarrassed while Rajjo puts her hand on Chirag's thigh in a consoling way.

Suddenly Chirag stands up and tells Rajjo that he is going to bring flowers on the demise of his love.

After Chirag walks out, Rajjo angrily confronts Kalindi for cheating on Chirag.

© Copyright tellybest.com, 2022, 2023. All Rights Reserved. Unauthorized use and/or duplication of any material from tellybest.com without written permission is strictly prohibited.
Cached Saved on: Wednesday 25th of January 2023 08:49:32 AMCached Disp on: Thursday 9th of February 2023 05:39:45 AM