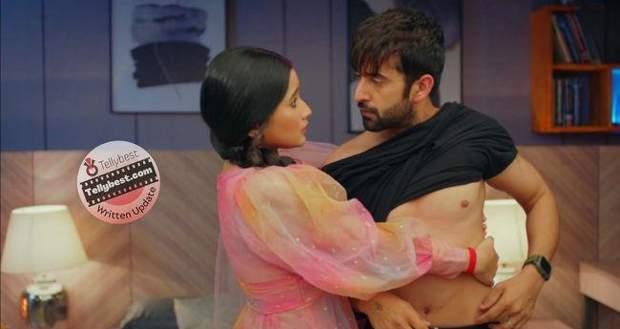 Naman makes everyone pull the straws and Arjun and Rajjo get the smallest ones and become the captain.

Rajjo chooses Niharika but Arjun quibbles that two runners cannot be in the same team.

So in the end Chirag goes in Rajjo’s team and Niharika in Arjun's.

Meanwhile, in the room, Kalindi is in her room when Rocky enters sneakily.

Kalindi gets scared seeing him and he looks at her with a mad look.

Outside the house, Rajjo wins the toss and chooses bowling, everyone starts to play and no one notices Kalindi’s absence.

Meanwhile, Rocky forces Kalindi and traps her to the wall, insulting her for fooling him.

Kalindi cries and requests him to leave her as her family is playing outside.

However, he accuses her of destroying his life and ruining his dream of earning money.

When Kalindi screams Chirag’s name Rajjo looks towards the window from outside and thinks she heard someone’s voice.

Kalindi bleeds from her elbow as Rocky throws her on the floor, she begs him to leave her and threatens him that Chirag will kill him.

Rocky maniacally laughs and suddenly Kalindi pushes him away and tries to run but he pulls her back.

He picks up the knife kept in the fruit basket and stabs her stomach.

Chirag takes Kalindi in her lap and Rajjo asks her who stabbed her.

Kalindi fingers towards Rocky who is standing aside with a glare.

Later, Rocky runs out of the house while Arjun sees him running while he is calling the doctor.

Chirag accuses Rajjo of not taking care of Kalindi as she was the only one who knew the whole truth.

He screams at her to run as she claims to be a racer and orders her to catch Rocky anyhow.

Both Arjun and Rajjo follow Rocky while the doctor arrives at the Thakur mansion.

The doctor says Kalindi is okay and Chirag cries as he cannot bear to see her in pain.

Madhu asks Chirag why he was blaming Rajjo for Kalindi’s stabbing.

On the other hand, Rajjo and Arjun pick up a catapult from a toy store and throw a stone at Rocky.

Rocky falls down from the impact and they bring him home while Chirag runs to beat him.

Madhu separates Chirag and Rocky and asks him the reason for beating him.

Chirag refuses to tell anyone anything but Rocky reveals to everyone that he and Kalindi had an affair.

Everyone gets shocked and Pushkar comes and runs to Kalindi’s room.

In the room, Pushkar asks Swara who did this and runs outside to beat Rocky when he gets to know he is the culprit.

Madhu accuses Pushkar that Kalindi has put black ink on her face and betrayed her trust.

Later, Rajjo interrupts Madhu and states Kalindi is not here to defend herself.

Madhu sarcastically asks Rajjo to defend Kalindi in her state as she knows her too much.

Chirag tells Madhu that Rajjo only helped him and she has nothing to do with Kalindi and Rocky’s affair.

Arjun supports Rajjo and she requests Madhu to listen to Kalindi's side of the story before deciding anything.

© Copyright tellybest.com, 2022, 2023. All Rights Reserved. Unauthorized use and/or duplication of any material from tellybest.com without written permission is strictly prohibited.
Cached Saved on: Wednesday 25th of January 2023 10:21:34 AMCached Disp on: Sunday 5th of February 2023 03:49:48 AM