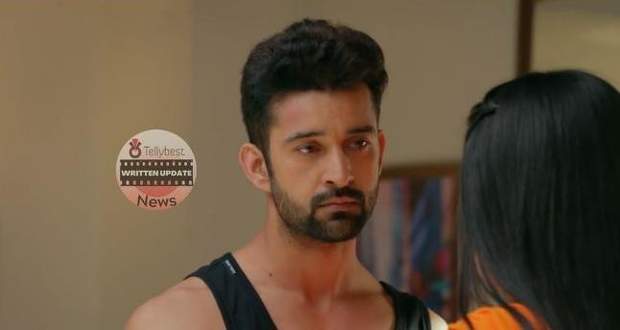 Today's Rajjo 5th November 2022 episode starts with Rajjo walking behind Arjun as they head toward the house which irritates Arjun.

After Arjun warns Rajjo to walk away from him, she continues to walk in front of him making Arjun more furious.

Meanwhile, Kalindi notices Rocky angrily playing basketball and decides to talk to him as he is sulking after watching her and Chirag together.

Rocky tells Kalindi that Chirag is more important to her as he is her husband while he is just a time-pass extramarital affair.

Kalindi explains to Rocky that it is not what he thinks but Rocky leaves after asking Kalindi to prove her point.

Just then, Chirag comes and starts playing basketball and says he is a master in basketball but has never won against her.

Later, the entire household gathers to criticize and insult Rajjo after hearing that she will participate in the Diwali race.

Madhumalti asks Rajjo who gave her the right to join her name with Arjun and take part in the race as a family member of the Thakur household.

She insults Rajjo as a low-class dirty person who does not know their limits in front of her masters.

Arjun adds to Madhumalti’s statement that people like Rajjo do not belong anywhere but only on the side of money.

Rajjo asks everyone to shut their mouths and says that she has had enough of the insults.

Rajjo announces that she will take part in the race as “Rajjo Manorama Dhaki” as she does not want to be a part of that family.

Explaining how she works day and night for their luxury and hears such insults all the time, Rajjo says that she will participate as the maid of the Thakur household.

Rajjo’s statement surprises everyone and Arjun gets angry at her asking her to shut up but Rajjo does not step back.

Rajjo replies that rich people like him do not know the values of the poor and she will show him his place on the race track.

Later, the registration person tells Arjun and Rajjo that even though both of them are not a family but they stay in the same house.

The man asks them to discuss the race among themselves and tells them that only one of them can participate in the race.

Rajjo requests Arjun to let her participate but Arjun does not step down and shuts the door in her face.

Coming up with a new solution, Rajjo challenges Arjun to a race between them to decide who will participate in the Diwali race.

Arjun accepts Rajjo’s challenge and swears to make her lose the race.

© Copyright tellybest.com, 2022, 2023. All Rights Reserved. Unauthorized use and/or duplication of any material from tellybest.com without written permission is strictly prohibited.
Cached Saved on: Monday 21st of November 2022 11:58:47 AMCached Disp on: Saturday 10th of December 2022 01:18:23 PM