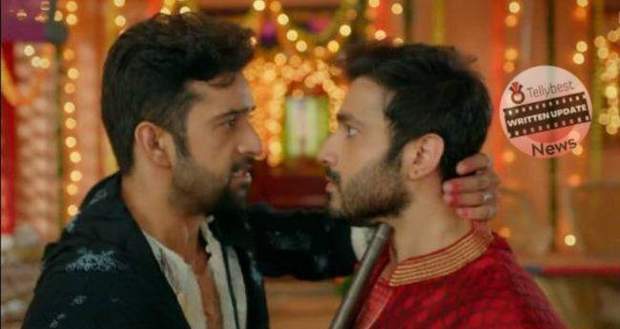 Today's Rajjo 5th October 2022 episode starts with Arjun finding out that Vicky is a smuggler who sells girls across the border.

Arjun tells the police to let him pass through immediately and speeds towards Rajjo's house.

Just then, Arjun gets a call from Madhu who asks him what he is doing out of the house when his marriage is in three hours.

Arjun tells Madhu that she will not be able to hear the truth and promises to be there before the Jaymala.

On the other hand, Manorama is getting Rajjo ready for marriage while she asks about her Khan Babu.

Rajjo asks if he came for her and apologizes to Manorama afterward telling her that Arjun wouldn't come as it is his wedding also.

On the other hand, Manorama stays silent knowing that she cannot tell the truth to her daughter that Arjun came to meet her in her drunkard state.

Rajjo asks Manorama to take her with her after marriage and she will be self-independent.

However, Manorama states that it is not possible and gets emotional as she tells Rajjo to always do what she feels is right.

Meanwhile, at the Rathore house, Pushkar is annoyed as Vicky is not picking up his calls when Sia asks him for help with something.

While helping Sia, she asks Pushkar if they can change Arjun's bride as Urvashi does not love Sia.

Pushkar says that it's not like that while Sia argues that her parents are like that also as they don't hug her or give her kisses.

Pushkar feels emotional as he hugs Sia and tells her that she and Urvashi will become one team after Urvashi and Arjun's marriage.

On the other hand, Rajjo picks up Arjun's call excitedly but can't hear him due to a network problem while Arjun keeps shouting to not marry Vicky.

Urvashi vents her anger on an employee when her mother comes there and tells her to not act childish.

However, Urvashi starts crying as she states that she thinks Rajjo is going to steal Arjun from her.

At the same time, Pushkar calls the police and asks them nicely if Vicky is caught or not.

The police inspector tells Pushkar that Arjun is taking them to Vicky's location and that they will catch him soon.

Pushkar calls Vicky immediately and informs him of the police coming while Arjun also tells Rajjo about Vicky being a criminal.

Before Rajjo does anything, Vicky covers her mouth with a cloth and takes her away from there with the help of his goons.

Meanwhile, Jhilmil asks Madhu about Arjun and Madhu lies that he is doing pooja at the temple.

© Copyright tellybest.com, 2022, 2023. All Rights Reserved. Unauthorized use and/or duplication of any material from tellybest.com without written permission is strictly prohibited.
Cached Saved on: Monday 21st of November 2022 06:51:21 AMCached Disp on: Wednesday 7th of December 2022 12:25:00 PM