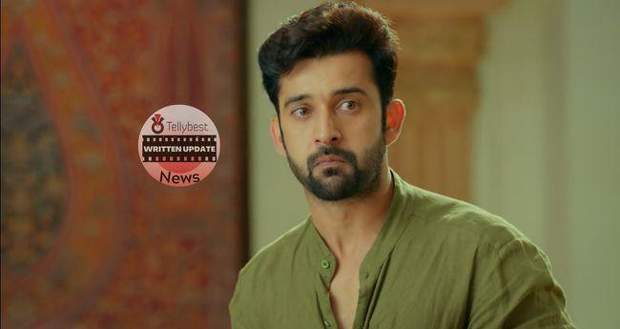 Today's Rajjo 5th September 2022 episode starts with Urvashi asking Arjun if he's hiding something from her.

Arjun recalls his moments with Rajjo will Urvashi tells him to hold her hand and help her remove the bracelet.

Urvashi talks to him about their jungle resort trip happening the next day.

Arjun asks her if they can go some other day as the bracelet breaks and falls to the ground with Urvashi's enthusiasm.

Urvashi asks him if he's breaking their relationship like the bracelet and reminds him that the next day is the anniversary of their first date.

Arjun goes next to her on the bed and tells her that they will go on the trip the next day only and that he will bring a bracelet for her too.

Urvashi hugs him tightly and talks about kissing him.

However, Arjun is only thinking about what to tell Rajjo and handle her while he's not home.

Later, Madhu feeds Arjun and apologizes for doubting him while he tells her that he has a video conference and takes the plate to his room.

Chirag also goes to his room and Kalindi taunts him while telling Madhu that Arjun is acting unusual.

Dadaji tells Kalindi that she talks unnecessarily and tells her to not worry about Arjun and focus on eating.

Meanwhile, Arjun gives the food to Rajjo and she gets emotional as she recalls Manorama feeding her.

Rajjo eats the kheer and burns her mouth while Arjun starts scolding her as he releases all his pent-up frustration and worries about how to take care of her.

However, Rajjo reveals that she got excited as she hadn't eaten Kheer for the past three years which makes Arjun guilty for scolding her.

Afterward, Arjun calls up the rescue center to ask about Manorama once again.

The next morning, Arjun and Rajjo get ready to go to the rescue center once again and go on their way.

However, a neighbor sees Rajjo climbing down the balcony and gets shocked.

Later, Arjun and Rajjo reach the rescue center while the refugees are told to come to the front as a VIP has come with media coverage.

At the same time, Pushkar comes to the same rescue center and acts nice to the media for getting publicity while he ignores his wife.

Meanwhile, Rajjo and Arjun once again fail to get any information on Manorama as the server is down and they leave while the media is clicking pictures of Pushkar in front of the center.

Manorama also gets out of the center and is parallel to Arjun and Rajjo.

However, as soon as Rajjo and Arjun get inside the car, Manorama notices Rajjo and runs after the car.