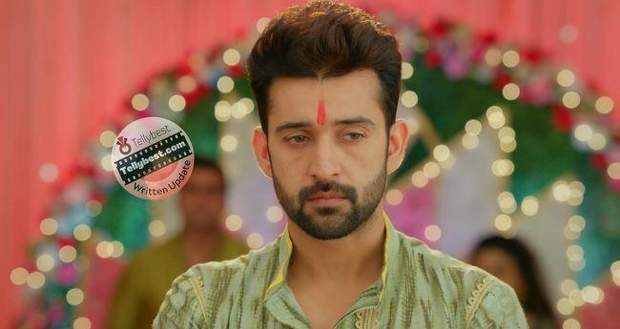 Today's Rajjo 6th December 2022 episode starts with Kalindi confessing her love for Chirag to Rajjo but she asks for a one-word answer for her cheating.

However, Kalindi clears that she is not giving excuses for her doing but the story of her loneliness.

Kalindi recalls how she was pregnant and Chirag was busy drinking, leaving her alone.

Rajjo hears Kalindi’s story with a confused expression as she doesn't want to support Kalindi but somehow sympathy sparks in her heart.

On the other hand, Arjun sits on the swing and recalls Manorama’s accusation about ignoring Rajjo and feels guilty.

At the same time, Urvashi enters the gate with Naman trailing behind and she gets shocked to see Arjun on the swing.

Arjun worriedly asks Urvashi where she was so late in the night but Naman defends her.

Urvashi diverts the topic and shows her anger to Arjun and he apologizes to her for the chaos in the tilak ceremony.

However, Urvashi ignores Naman’s request and he walks away disappointed.

Later, Urvashi assures Arjun that she will not let Rajjo and Manorama do any harm in their marriage.

She requests Arjun to sleep the night with her and both go away hand in hand.

Meanwhile, Chirag is walking in a corridor while holding a whiskey bottle and drinks it in one go.

In the corridor, Kalindi narrates to Rajjo how she went into postpartum depression after she gave birth to Sia.

Kalindi exclaims she wasn’t able to melt herself in the mould of society's expectations of a mother.

Then she met Rocky who watched her as Chirag saw her with eyes full of love and that concludes her reason for adultery.

Kalindi puts the tag of “bewafa” on Chirag as he left her in the most vulnerable state.

Rajjo hugs Kalindi and she cries her heart out but suddenly Rajjo sees Arjun and Urvashi ascending the stairs.

She pulls Kalindi behind the pillar unaware that Urvashi already knows the truth.

After Arjun and Urvashi go to their room, Kalindi informs Rajjo that Urvashi knows everything that why she lied about the fixed deposit that day.

Kalindi requests Rajjo to rescue Chirag as she knows that he will go out to buy a new bottle in his drunken state.

She walks away and cries for her deeds in her room while sitting on the foot of her bed.

Meanwhile, Chirag is walking on the road in his drunken state.

In Manorama’s room, Pushkar threatens Manorama to kill her while she picks a vase.

Manorama swings the vase towards Pushkar’s head but he turns around at the same time.

She stops mid-way while Pushkar slams the vase down in sheer anger.

Elsewhere, a truck is approaching Chirag and Rajjo runs towards him calling his name.

Rajjo takes a sprint while he is not aware of the truck’s horn in his drunken state.

She pulls Chirag aside on the grass present on the sidewalk and picks him up, supporting him on her shoulder.

In Manorama’s room, Pushkar grabs Manorama's hair and shuts her mouth with his hand while she screams for help.

Pushkar pushes her face into the wall and stops just before the cloth nails could hit her.

He grabs her hair tightly while Arjun’s voice booms in the room.

© Copyright tellybest.com, 2022, 2023. All Rights Reserved. Unauthorized use and/or duplication of any material from tellybest.com without written permission is strictly prohibited.
Cached Saved on: Wednesday 25th of January 2023 05:15:08 PMCached Disp on: Sunday 5th of February 2023 04:37:23 AM