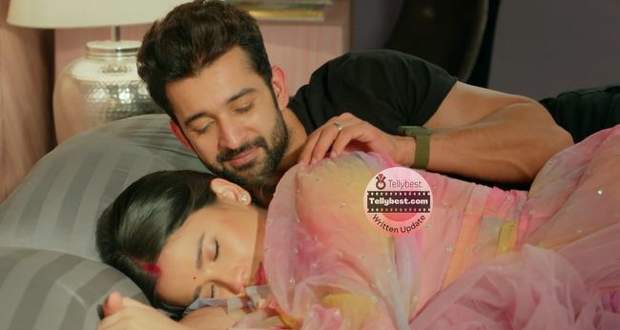 Pushkar asks Chirag why he didn't do anything when he knew about the affair.

Rajjo defends Chirag by stating that he installed security cameras and locks in the house to refrain Rocky from entering the house.

Rocky thanks Rajjo for letting him enter but Rajjo defends herself that she didn’t know when he entered.

Pushkar accuses her of letting Rocky inside so he can hurt Kalindi and take revenge.

Arjun warns Pushkar to mind his words and not say anything insulting to her.

Madhu comes between Rajjo and Pushkar and insults Kalindi for having an affair with her brother-in-law.

Pushkar threatens with his indirect words that he will tell the truth about her true intentions to everyone.

However, Madhu also threatens him with indirect words that she will tell about his infidelity with Manorama.

Later, Arjun screams shut up at Pushkar when he calls Rajjo a bad omen.

He takes her side and warns Pushkar to keep his tongue in the hold while Rajjo holds Arjun’s bicep and requests him to not fight.

Chirag assures her that she did not do anything and told everyone that Rajjo saved him when he was about to suicide in front of the truck after knowing about the affair.

Meanwhile, Kalindi hears Chirag’s words in the room and feels grateful for having a great husband like Chirag.

Pushkar and Madhu again start to argue about whose fault it is and Chirag blames his alcohol addiction for the demise of their relationship.

Chirag promises them that he will take care of Rocky after Kalindi gets healed.

In Kalindi’s room, Chirag sits on her side and kisses her hand delicately and assures her that he will handle everything until she is with her.

In Arjun’s room, Rajjo stops Arjun and apologizes for not telling him about the affair.

She states that she wanted to save Chirag and Kalindi’s relationship.

Arjun accuses Rajjo of not working on their relationship but she makes an excuse that she promised Chirag and Kalindi.

Saddened by her actions, Arjun accuses her of not getting recognition from her.

On the other hand, Puskar informs Niharika to leave for her training and also asks her to call Rajjo.

Meanwhile, Rajjo states that they haven’t taken any pheras or oaths in their marriage and Arjun contradicts that everything is based on their bond, trust etc.

Niharika interrupts their conversation and takes away Rajjo as she needs to buy shoes for her training.

He put the powder in a tin box and laughs maniacally as he plans to make Rajjo eat the toxic powder.

The next morning, Rajjo and Arjun are angry with each other and do childish things like keeping the wardrobe open and slamming the glass of water on the tray.

Arjun apologizes to Rajjo for making her a ghanti and states he does not expect her to do anything for him.

He calls their relationship hollow as it does not consist of any trust.

© Copyright tellybest.com, 2022, 2023. All Rights Reserved. Unauthorized use and/or duplication of any material from tellybest.com without written permission is strictly prohibited.
Cached Saved on: Wednesday 25th of January 2023 11:11:38 AMCached Disp on: Wednesday 1st of February 2023 06:58:29 PM