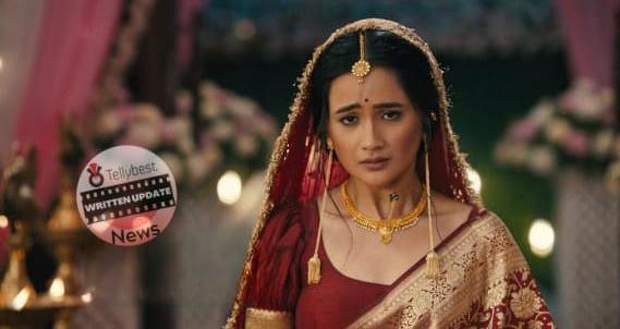 Today's Rajjo 6th October 2022 episode starts with Vicky throwing Rajjo in the car while Arjun and the police car follow Vicky and his friend’s car.

The car chase starts, Arjun speeds his car up and tries to put his car in front but Vicky signals his friends.

Vicky and his friend separate their car on different paths and Arjun turns to Vicky’s car praying that Rajjo is in that car.

In Thakur house, Madhumalti distributes the heavy gold jewellery to all family members.

Afterwards, everyone asks about Arjun's whereabouts but Madhu says he is busy doing a puja.

On the other hand, Rajjo recalls her Maai words of never giving up and she struggles to open her hand.

Meanwhile, Arjun tries to come in front of Vicky’s car but Vicky is swirling his car left and right blocking his path.

At the same time, Rajjo throws her bangle on Arjun’s windshield making him know about her presence.

Arjun speeds his car up and sees Rajjo in the backseat and drives beside Vicky’s car and glares at him.

In Thakur’s house, Madhumalti finds out that Chirag has given his protection necklace to his brother and confronts him about Arjun's whereabouts.

Pushkar loudly asks Madhu and Chirag about Arjun’s whereabouts as he wants to know about Vicky’s status.

However, Urvashi’s mother calls Arjun careless and asks Madhu about the important work for which Arjun has gone.

In Vicky’s car, Rajjo feels a beer bottle roll on her feet and she picks the bottle and slams it on Vicky’s head.

Meanwhile, Vicky stops the car at the side and taking up the opportunity Arjun stops his car in front of Vicky’s.

In Thakur’s house, everyone blames Madhu for hiding the truth about Arjun’s whereabouts while Pushkar asks them where he is.

However, Chirag lies to everyone that he got Arjun’s message that he is coming in some time while Swara sees Chirag’s blank screen.

After everyone calms down and resumes the festivities, Swara confronts Chirag for lying and asks him where Arjun is.

Chirag tells Swara he lied because everyone was blaming Madhu for Arjun’s actions and requests her to not tell anyone about Arjun’s absence.

Meanwhile, Swara agrees to Chirag’s request while Pushkar is in a dilemma as he cannot ask anyone about Vicky’s whereabouts.

On the other hand, Rajjo runs out of the car and meets Arjun in the middle of the road while Vicky comes out with his gun.

Vicky points his gun towards Arjun and Rajjo comes in front of him but Vicky pulls her in his arms.

Meanwhile, Vicky’s friend takes Rajjo and locks her in the car and Vicky points his gun toward Arjun.

© Copyright tellybest.com, 2022, 2023. All Rights Reserved. Unauthorized use and/or duplication of any material from tellybest.com without written permission is strictly prohibited.
Cached Saved on: Monday 21st of November 2022 07:09:10 AMCached Disp on: Tuesday 6th of December 2022 01:39:49 PM