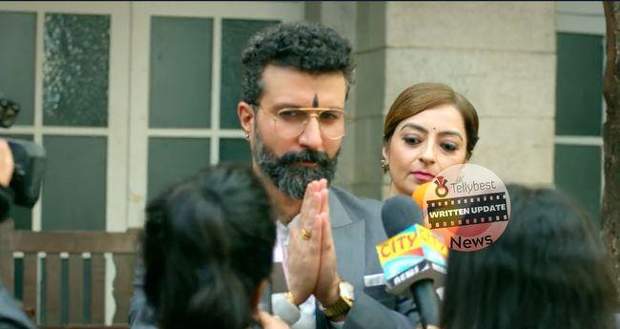 Today's Rajjo 6th September 2022 episode starts with Rajjo sitting in a car lost in her memories of when she danced and laughed with Manorama.

Arjun comforts Rajjo saying that they will find her mother soon after which he gives her money and tells her to go and get some clothes for herself.

Rajjo goes to the stall and keeps showing dresses to Arjun who gets angry but feels embarrassed and gives her a thumbs up at last.

However, Rajjo comes with only one dress which angers Arjun and he goes to the stall himself and buys a bunch of clothes for her.

Just as he enters the car, Urvashi calls him and flirts with him while telling him that she can't wait for the next day.

Rajjo keeps holding in her laughter while Arjun gets embarrassed and disconnects the call.

Rajjo jokes that he has a lot of names and asks him if he's going to the jungle with Urvashi.

Arjun immediately says yes and looks away saying that he should not feel bad about spending time with Urvashi.

Later, at home, Arjun gives all the precautions to Rajjo and tells her to pull up the food delivery from the balcony as she assures him that she won't make even a single sound.

As Arjun is leaving, Rajjo prays to go that he doesn't get bitten by any animal which halts Arjun's steps.

Further, he locks the room from the outside and goes to Madhu to whom he lies that he is going for a meeting and will be back the next day.

After some time, Rajjo takes the food delivery while Madhu thinks that she saw something and comes outside.

Kalindi tells Madhu to increase the height of the grills on Arjun's balcony and lock the door of the balcony as she has done on the front door.

On the other hand, Arjun gets the message that Manorama has been found and rushes back home.

Madhu goes to the kitchen and brings out the pestle using which she breaks the lock on Arjun's door.

However, inside is only Arjun with the outside food lying on the bed while Rajjo is hiding in the closet.

Flashback shows Arjun seeing the family members going towards his room and climbing into his room using the balcony after which he hides Rajjo before the family can enter.

Back in the present, the ladies of the family start scolding Arjun for eating outside food while Dadaji comes forward and says that he is the one who helped Arjun with the plan so that he could eat outside food.

Meanwhile, Kalindi is searching the room when she gets distracted as Chirag makes a noise and leaves from there.

© Copyright tellybest.com, 2020, 2021. All Rights Reserved. Unauthorized use and/or duplication of any material from tellybest.com without written permission is strictly prohibited.
Cached Saved on: Saturday 1st of October 2022 10:27:40 PM