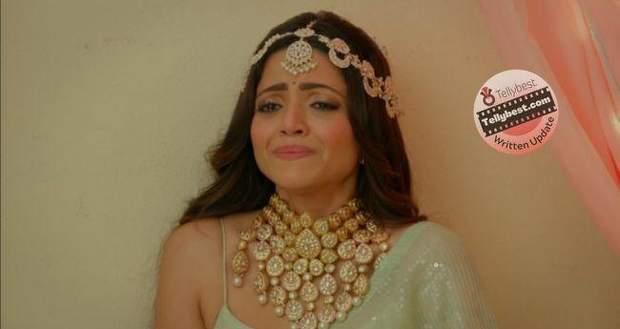 Puskar acts as a victim saying that Manorama did a lethal attack on him with the vase.

Jhilmil supports Pushkar while Arjun asks Pushkar why did he come to Manorama’s room when he has no business with her.

On the road, Chirag sits on the sidewalk shattered by Kalindi’s betrayal and refuses to go back.

Rajjo holds his arm but he banters in his drunk state and does not listen to her.

Meanwhile, in Pushkar’s room, Pushkar lies that he sent the nurse to eat and when he turned around Manorama was standing with a vase aimed towards his head.

Pushkar manipulates everyone into believing that Manorama can be a threat to everyone’s life.

The family agrees to send Manorama away while Manorama screams for Chirag and Rajjo to save her.

Madhumalti orders Jhilmil to kick Manorama out but Arjun stops her.

On the road, Chirag stutteringly says that they will enter the home from the back door only so no one knows about Kalindi’s affair.

He cries and states that a relationship breaks due to the mistake of both partners, not one.

Rajjo's eyes fill with tears seeing Chirag caring for Kalindi even after being cheated by her.

In the room, Arjun defends Manorama and assures everyone that she cannot harm anyone but Madhumalti insults him for his urge to do charity work every time.

Everyone leaves the room angrily and the nurse enters the room.

Arjun makes Manorama sit on the bed and give her a glass of water and orders the nurse to take care of her.

She decides to erase the barriers in the relationship between Rajjo and Arjun and fight against Pushkar.

On the other hand, Rajjo supports Chirag on her shoulder while he asks Rajjo to promise her to not tell anything to anyone, even Arjun.

Rajjo agrees and takes him home with great difficulty.

In the living room, Madhumalti insults Arjun for helping Manorama but he defends Manorama.

He assures the family member to wait till his marriage with Urvashi then he will kick them out himself.

In Kalindi’s room, Rajjo puts Chirag on the bed and when Kalindi tries to help him he gets disgusted by her touch and pushes her hand back.

Kalindi cries and Chirag sprawls on the bed while Rajjo sees Sia watching the scene.

Rajjo walks to Sia and sits on her knees while Sia asks her what happened to Chirag.

Sia tells Rajjo that Chirag started loving him after Rajjo came into their lives and she cannot afford to lose him.

Rajjo assures Sia that Chirag is completely okay and Sia walks to Chirag and kisses him on the cheek wishing him a speedy recovery.

After wishing Sia good night, Kalindi hugs Rajjo and thanks her for helping Chirag.

Meanwhile, Arjun is thinking about Rajjo’s whereabouts as so many events have happened with her mother and she is nowhere to be seen.

© Copyright tellybest.com, 2022, 2023. All Rights Reserved. Unauthorized use and/or duplication of any material from tellybest.com without written permission is strictly prohibited.
Cached Saved on: Thursday 26th of January 2023 12:20:14 AMCached Disp on: Wednesday 1st of February 2023 08:53:42 PM