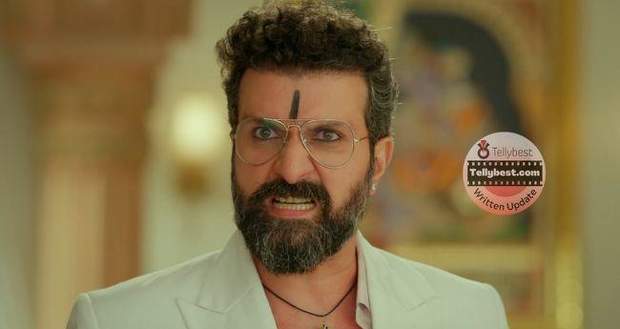 Today's Rajjo 7th January 2023 episode starts with Arjun calling their relationship a game in anger and Rajjo pushing him back asking him to play if it is a game.

Arjun holds her arms tightly while she calls him heartless.

Rajjo taunts him for not seeing what’s in her heart and advises him to make an attempt to read a face rather than looking in the mirror every second.

On the other hand, Pushkar gives Niharika the tin box and praises Rajjo's talent and advises her to give the supplement box to her.

Meanwhile, Manorama hears Pushkar praising Rajjo and feels suspicious as she knows he will never praise her.

Later, Madhu stops Rajjo from going to her training as she wants her to give time to Arjun.

Madhu states that if she will run all day she will get exhausted until night then how she can talk with Arjun.

Everyone laughs at her words but Rajjo assures her that she has great stamina for the night.

At the same time, Pushkar enters, assuring everyone that he will take care of Rajjo’s nutrition and health.

He gives Rajjo the supplement box and Niharika tells her that the powder is made from the academy’s secret recipe and urges her to eat it.

Manorama snatches the box from Rajjo and smells the powder and senses the weird smell and advises her to not consume anything.

However, Rajjo stubbornly says she wants to try what athletes do to become great racers.

Later, in the room, Rajjo is wiping her wet hair with a towel while Arjun watches her regretting his rude words.

Arjun looks at Rajjo carefully when she puts vermillion in her hairline and recalls their conversation.

They start to fight again and he finishes the conversation by saying he doesn't want to uphold this relationship.

Suddenly someone calls Rajjo and she stumbles, Arjun holds her hand and pulls her close.

Rajjo looks into his eyes wondering what kind of relationship is that they fight but still care for each other.

Before going, Arjun asks her to walk carefully on the rocky hills but she asks him to not care for her.

However, he states that he has married her and he will care for her his whole life.

Rajjo taunts him that he married her for his mother and he doesn't need to show fake concern as she will get habitual of this.

In the evening, Rajjo enters with Niharika and Madhu orders her to not talk about anything related to the race now.

Madhu states that men are restless after getting married and taunts Pushkar for feeling restless before marriage.

She shakes off the words laughing while Rajjo asks Niharika how to make Protein ladoo.

Pushkar refuses to let Niharika make the ladoo and eat them so he changes the topic.

In the room, Arjun recalls his conversation with Rajjo and starts to banter his thoughts.

© Copyright tellybest.com, 2022, 2023. All Rights Reserved. Unauthorized use and/or duplication of any material from tellybest.com without written permission is strictly prohibited.
Cached Saved on: Wednesday 25th of January 2023 12:41:45 PMCached Disp on: Tuesday 31st of January 2023 06:14:25 PM