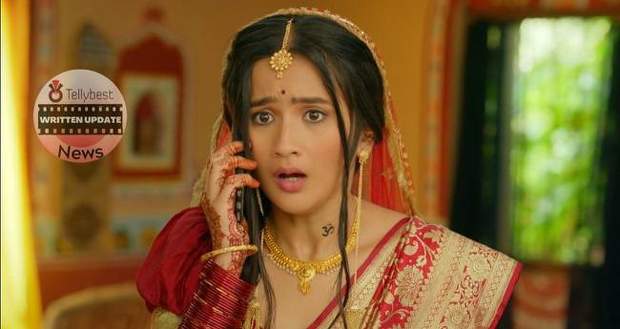 Seeing the opportunity, Arjun punches Vicky’s face and he falls to the ground while Rajjo hugs Arjun tightly.

Meanwhile, Vicky tries to pick the gun up but Arjun kicks his face and threatens him to never come near his Rajjo.

In the cottage, Manorama finds out Rajjo and Vicky are missing and gets worried.

On the road, Rajjo and Arjun beat Vicky and his friend blue and black.

On the other hand, Chirag is calling Arjun continuously and is about to drink alcohol from frustration but Swara stops him and requests him to not drink alcohol.

Meanwhile, Chirag tells Swara that he is worried because of not getting any calls or texts from Arjun.

On the road, Rajjo holds the collar of Vicky's friend and slams his head on the road while Arjun slams Vicky into a tree.

Meanwhile, Vicky taunts Arjun for playing with Urvashi’s love while Rajjo beats his friend with slippers.

Later, Arjun holds Rajjo’s hand and points the gun at Vicky and suddenly he starts to act as a victim.

At the same time, a group of villagers holding long sticks in their hands arrive at the scene and Rajjo thinks they have come to help her.

However, Vicky recalls ordering his friends to call nearby villagers in case of an emergency.

On the other hand, Manorama is running on the road scared for Rajjo and a stranger informs her about seeing her daughter ahead.

In the meantime, the villager orders Arjun to apologise to Vicky and slams the stick head on Arjun’s rib case making him fall in pain.

In Thakur's house, Swara lies to everyone that Arjun has arrived in his room and is getting ready.

On the other hand, Arjun releases Rajjo from the villager's hold and Vicky accuses him of taking advantage of his bride and narrates her story of finding Manorama in a twisted way.

Later, the Sarpanch orders Rajjo to shut up when she tries to confront Vicky while he says Arjun is a human trafficker and wants to keep Rajjo as a mistress.

Furious Arjun runs towards him but the villagers hold him and Manorama reaches the scene with Nangu Kaka, Rashmi and Gudiya.

Meanwhile, Rajjo tells everyone the truth about Vicky kidnapping her and Arjun request everyone to call the police.

At the same time, Gudiya is making a video of the whole scene while Manorama watches the scene frozen.

Arjun declares that he is not going anywhere until the matter is solved and asks for Sarpanch’s mobile phone to call the police.

However, the Sarpanch refuses to call the police as his village does not believe in their judgement and Vicky gets happy.

© Copyright tellybest.com, 2022, 2023. All Rights Reserved. Unauthorized use and/or duplication of any material from tellybest.com without written permission is strictly prohibited.
Cached Saved on: Monday 21st of November 2022 06:51:13 AMCached Disp on: Tuesday 6th of December 2022 02:10:52 PM