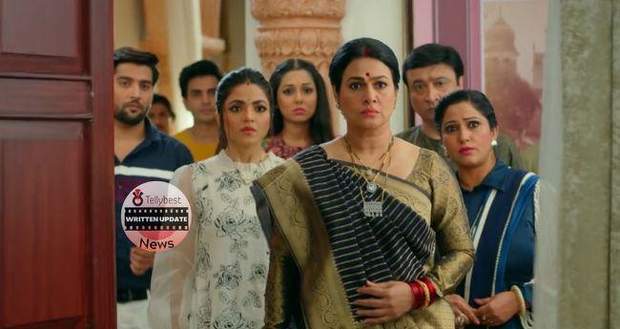 Today's Rajjo 7th September 2022 episode starts with Kalindi going near the closet where Rajjo is hiding.

However, before she can open it, Dadaji tells her and everyone to get out of the room.

Madhu thinks that her son is lying to her and thinks to figure it out.

Afterward, Rajjo apologizes to Arjun while he tells her the news that Manorama is found and that they will go to the rescue center the next day.

Rajjo hugs the medal to herself thinking that she can hug Manorama while Arjun asks about the medal.

He sees that it's a gold medal from a state-level championship and gets impressed while telling Rajjo that she takes after her mother in her running skills.

Rajjo gets happy and says that she will ask her mother about it while Arjun tells her to ask with no doubts.

Further, Rajjo starts singing and Arjun stops her and tells her to sing in her mind only.

On the other hand, Urvashi is dressed beautifully while she thinks to get Arjun's attention which he hasn't been giving her once he comes to the resort.

Arjun gets caught by his mother in the kitchen and she piles food on his plate while he tries to come up with an excuse.

Afterward, Arjun rushes into his room and gives the plate of food to Rajjo while he also sits beside her to eat from the same plate.

Rajjo remembers something and laughs as she tells Arjun that love grows stronger if they eat together.

Arjun starts getting angry and scolds her when he suddenly starts hiccupping.

Rajjo gets close to him and steps on his feet which makes his hiccups stop due to the shock.

She goes back to her place and tells him that it is an anecdote to stop the hiccups.

Rajjo reminds Arjun about the jungle resort and he tries to call Urvashi but the call doesn't get connected.

On the other hand, Urvashi imagines dancing with Arjun and gets angry when she realizes that Arjun didn't come.

Arjun starts hiccupping again as he takes advice from Rajjo and sends a message to Urvashi's mother apologizing for not being able to go to the resort.

Afterward, Arjun tells Rajjo to stop his hiccups and she again stands on his feet getting close to him.

The next day, Arjun and Rajjo go to the rescue center where the desk person tells them the room number where Manorama is residing.

On the other hand, Manorama's roommates are suggesting she leave the center and go look for her daughter.

Rajjo runs to the room while Arjun holds the gold medal and shouts for Rajjo to run.

© Copyright tellybest.com, 2020, 2021. All Rights Reserved. Unauthorized use and/or duplication of any material from tellybest.com without written permission is strictly prohibited.
Cached Saved on: Saturday 1st of October 2022 12:33:52 AM