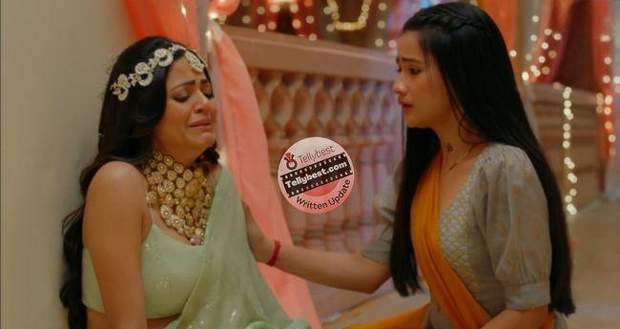 Later, Rajjo descends the stairs and Arjun questions her whereabouts and she lies.

Arjun informs Rajjo that Manorama tried to kill Pushkar and she gets shocked and defends her Maai.

He taunts Rajjo for finding a new lover in his Tilak ceremony and because of that she didn’t have time to take care of her mother.

Arjun calls Rajjo unfaithful and advises her to take care of her mother if she doesn’t want to lose her.

He walks away while Rajjo cries because she cannot say anything about her whereabouts to Arjun as his heart will break hearing about Chirag.

Later, Rajjo walks to Manorama's room but the nurse pushes her back.

The nurse angrily orders Rajjo to go away as no one is allowed inside Manorama’s room because of her ill mental health.

In the room, Manorama puts her ear on the door to hear the commotion.

Meanwhile, Madhu scolds Rajjo for her loud voice while Rajjo tries to break the lock on the room.

Manorama whispers to Rajjo to leave without creating any drama so Rajjo apologizes to Madhu and goes away.

In Kalindi’s room, Chirag whispers words of hurt even in sleep and Kalindi calls Rocky to sort everything out before Chirag wakes up.

However, Rocky does not pick up her call and she cries out of frustration.

In the living room, Arjun’s sibling teases him and demands a surprise for Urvashi at the next party.

Urvashi does dance practice with Arjun’s siblings while he watches Rajjo who is delegating the luggage.

At the same time, Arjun and Urvashi’s friend see Rajjo and asks her to be his dance partner.

Gautam (Arjun and Urvashi’s friend) compliments Rajjo for being cute and she talks to him excitedly.

Meanwhile, Arjun feels jealous and Urvashi instigates him against Rajjo.

Arjun gives the chore list to Rajjo while Urvashi taunts Rajjo by advising Gautam to call her Ghanti.

Gautam puts his hand on Arjun’s stomach and teases Arjun by asking him if he is cow dung or bull dung.

Everyone laughs while Rajjo informs him that the chore list is in English and she cannot read it.

Arjun and Rajjo go into a corner and she scolds him for jumping into her every conversation.

When Arjun accuses Rajjo of flirting with Gautam she reminds him that she has already signed the divorce papers.

Arjun folds his arms and states Rajjo cannot do anything while she copies his pose and firmly says she will do it as he doesn’t have any right to stop her.

When Rajjo walks by Arjun he holds her hand making her heart beat faster hoping that he will stop her.

However, Arjun shatters her heart by agreeing to her words of not having any right to stop her to find a new lover.

Rajjo sits on the kitchen floor frustrated at Arjun and cries lying on the floor.

At the same time, Chirag staggers into the kitchen and stumbles.

Rajjo holds him and helps him sit on the floor while Chirag assures her that he is alright.

© Copyright tellybest.com, 2022, 2023. All Rights Reserved. Unauthorized use and/or duplication of any material from tellybest.com without written permission is strictly prohibited.
Cached Saved on: Thursday 26th of January 2023 06:30:24 AMCached Disp on: Monday 6th of February 2023 05:16:00 AM