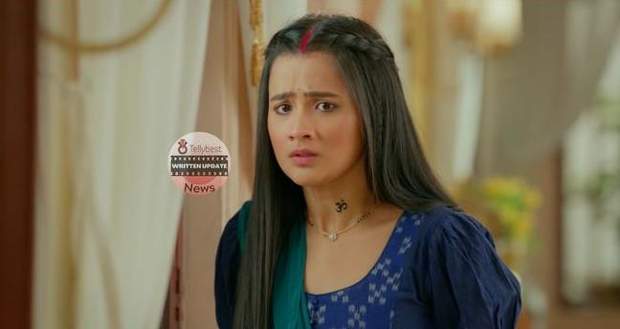 Today's Rajjo 8th November 2022 episode starts with Rocky hesitating to take the ice box to Arjun as he is not sure about the medicine being effective after falling out of the box.

Rocky decides to keep the box on the table as he does not want to take a risk by giving it to Arjun by himself.

Further, Rocky admits that he does not love Kalindi in reality and cannot take the blame for ruining the medicine in her stead.

After Rocky leaves, Rajjo comes and notices the ice box and decides to give it to Arjun.

Arjun takes out the medicine and drinks it without knowing that it has already fallen out of the box once.

Rajjo teases Arjun by telling him that old men in her village used to drink tonics like that for an energy boost.

Arjun gets offended and tells Rajjo that this medicine is not similar to those ones.

While arguing about strength capabilities, Arjun and Rajjo begin to throw soft toys at each other which Rajjo was carrying.

Chirag cheers for both of them, making them stop their petty fight and Rajjo leaves from there.

Chirag tells Arjun that he should stop tormenting Rajjo with such methods and asks him to look into the mirror and check if he has changed.

Later at night, Rajjo runs on the streets in the middle of the night and checks the time on her phone to calculate her running speed.

Chirag comes there and stumbles on his steps as he is drunk which offends Rajjo.

Rajjo asks Chirag why he has drunk again to which Chirag answers that he has no one in his life without alcohol.

Chirag tells Rajjo how no one in the family or business takes him seriously so he takes shelter into alcoholism.

Rajjo takes away Chirag’s alcohol bottle and refuses to give it, leading it to fall to the ground, waking up Arjun.

Arjun comes out to see Chirag sitting outside who asks him to return inside as it is midnight.

However, Arjun notices Rajjo running in a puddle of mud while attaching a tire to her with the help of a rope.

Rajjo runs diligently but suddenly slips on her footing and gets saved by Arjun from falling to the ground.

Arjun holds onto Rajjo as she tries to stand up but slips on the mud again.

As Arjun asks Rajjo to come inside the house due to the degrading weather outside, Rajjo refuses because she thinks that Arjun is jealous of her preparation.

Arjun clenches his jaw and tells her that he does not care while Rajjo continues her practice.

© Copyright tellybest.com, 2022, 2023. All Rights Reserved. Unauthorized use and/or duplication of any material from tellybest.com without written permission is strictly prohibited.
Cached Saved on: Monday 21st of November 2022 05:59:11 AMCached Disp on: Tuesday 29th of November 2022 12:27:58 AM