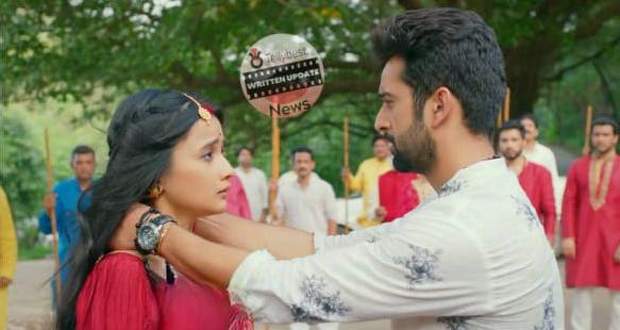 Today's Rajjo 8th October 2022 episode starts with the villagers declaring that Sarpanch’s decision will be the final decision.

At the same time, Vicky sees Manorama and brings her close to everyone, and asks her to tell villagers the truth.

The villager asks Manorama if Vicky is good for Rajjo while Khan Babu requests her to not let Rajjo marry Vicky.

On the other hand, Chirag tells Swara to think of a ritual to distract the family from Arjun’s absence and Swara gets an idea.

Meanwhile, Rajjo tells Maai about Vicky kidnapping her and pointing a gun at Khan Babu’s head.

Crying Manorama tells everyone she does not know as she is not sure of Vicky anymore.

Afterward, both Vicky and Arjun start to fight with each other but Manorama stops them.

Later, the Sarpanch declares that Vicky and Rajjo will get married as the marriage was fixed with both Manorama and Rajjo’s confirmation.

The Sarpanch threatens Arjun to not interfere in their matters else his family will not find his body and orders him to go.

In Thakur's house, Swara takes the crystalized sugar (Patashe) for the ritual while Urvashi comes down and informs Jhilmil that she is going to a salon in a sad voice.

Calling Madhu, Jhilmil informs her about Urvashi's going out and Madhu refuses immediately.

However, when Urvashi and her mother plead with Madhu by reminding her about Arjun's going out, she agrees reluctantly but orders Urvashi to return before the auspicious time.

On the other hand, Arjun watches the temple and Rajjo sees the gun and thinks Khan Babu is thinking of picking up the gun.

Holding hands, both dash towards the temple/gun, and Rajjo picks the gun from the ground while Arjun picks up the sindoor and fills Rajjo's hairline.

Feeling the sindoor on her head, Rajjo gets shocked while the song “Laal Ishq” plays on the ground.

Meanwhile, Gudiya makes a video of Arjun binding the mangalsutra on Rajjo's neck.

A red dupatta flies on and covers Arjun and Rajjo's heads and they get lost in each other’s eyes.

Arjun declares that Rajjo is his wife now and whoever will look at her he will shoot a bullet at them.

At the same time, the police arrive and arrests Vicky and Manorama slaps Vicky and regrets her decision of marrying Rajjo with him.

Meanwhile, the police officer thanks Arjun and tells him to come to the police station with them to record his statement.

At the police station, Arjun apologizes to Rajjo for marrying her like that but Rajjo expresses her gratitude for saving her.

Just then, Arjun tells her that he needs to go back to his home to marry Urvashi.

© Copyright tellybest.com, 2022, 2023. All Rights Reserved. Unauthorized use and/or duplication of any material from tellybest.com without written permission is strictly prohibited.
Cached Saved on: Monday 21st of November 2022 06:04:39 AMCached Disp on: Tuesday 6th of December 2022 12:20:29 PM