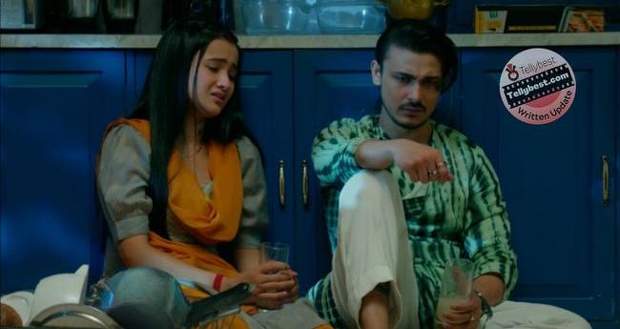 Today's Rajjo 9th December 2022 episode starts with Rajjo & Chirag talking to each other while sitting on the kitchen's floor.

Chirag is drunk and Rajjo makes a lemonade for him to get sober.

Both share the vows of their love life as Chirag says it is love which has brought them to this condition.

Rajjo starts speaking about Arjun & how he still stares at her whenever he is with Urvashi.

Her chin quivers while Chirag laughs dimly and says this is how we know that Arjun is fond of Rajjo.

Rajjo changes the topic and asks Chirag to stop drinking.

Chirag tells Rajjo that Kalindi despite knowing everything never stopped him from drinking while Rajjo urges him to give his relationship a second chance.

She shoves a spoonful of sugar and advises him to start life afresh.

A drunk Chirag then makes a crown out of the aluminium foil and puts it on Rajjo's head, saying she is the princess of her life & has the ability to save her prince too.

The next day, Urvashi gets a call from one of the guys of Loan Sharks who asks her to hide the drugs in Thakur Nivas as nobody will suspect them.

Urvashi gets worried while Naman comes behind Urvashi and asks her playfully whether she has a new boyfriend or not.

Urvashi panics for a second, thinking Naman heard everything but he is here to tell Urvashi not to marry Arjun but him as he is the right choice.

Meanwhile, Rajjo is happy after hearing Chirag say that Arjun is fond of her but doubt keeps arising in her mind.

Urvashi warns Naman to stay away while Rajjo hears both of their conversations & vows to bring her truth out in front of Khad Babu.

While Urvashi & Arjun are doing a couple dance, Rajjo comes there & announces she will dance too.

Urvashi says she doesn't want to see Rajjo's face in any of her marriage functions while Rajjo playfully taunts Urvashi to ask her soon to be husband to let her go.

Arjun stays silent as Rajjo asks Naman to be her dance partner and he agrees to make Urvashi jealous.

While dancing together, Arjun peeps at Rajjo and thinks she has stooped so low for Naman.

Naman snakes his hand closer and Arjun feels jealous while Rajjo intentionally says Naman looks sad as if someone has broken his heart.

Naman agrees and tells Rajjo she is right & she states that faces never lie.