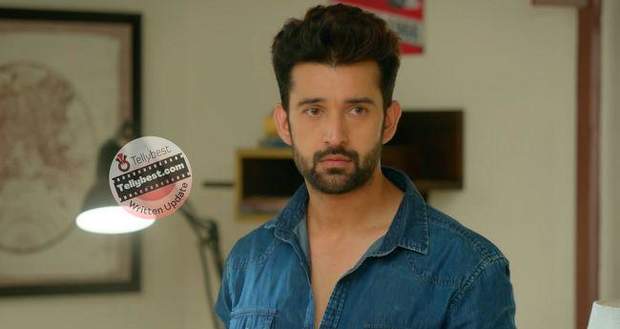 Today's Rajjo 9th January 2023 episode starts with Arjun picking up his belongings from his room.

Infuriated Rajjo snatches a pillow from him and quibbles with him stating to not call for her when he needs something.

They crash and the key goes beneath the bed, Rajjo slides onto the floor to pick up the keys.

Arjun joins her on the floor and their hand touches and both get lost in each other.

Later, Arjun walks out of the room and Rajjo slams the door loudly expressing her anger.

In the car, Pushkar, Jhilmil, Pratap, Chirag, Kalindi, Manorama and Madhu are driving together to Mahadev temple.

Chirag worries for Kalindi and constantly asks her if she’s comfortable but irritated Kalindi orders him to stop.

He gets upset so she apologizes and puts her head on his shoulder which makes him smile.

Meanwhile, Madhu has asked Rajjo to light an incense powder kept in a clay pot and purify the house with its smoke.

Rajjo tries to find a matchstick and jokes seeing Arjun’s picture that she can light the incense with the picture as his head is always hot.

On the other hand, Madhu informs Jhilmil that she put cannabis in the incense pot.

Later, in the room, Rajjo gets intoxicated and gets happy recklessly and acts like Arjun.

She opens the wardrobe and misunderstands Arjun's shirts as him and calls him a naughty boy for hiding in the wardrobe.

Rajjo takes out a shirt and acts like Arjun while laughing intoxicated.

In the temple, Madhu prays to Mahadev to unite Arjun and Rajjo while Manorama is suspicious of Pushkar for hampering Rajjo's race.

Meanwhile, Pushkar reasons with god that he can kill at least 1 person to save his family of five.

Manorama asks for a sign from god which proves that Pushkar is behind Rajjo’s failed race.

At the same time, a snake wraps around Pushkar’s legs and crawls to his neck.

He gets scared while the snake looks at him eye to eye while Pratap orders Chirag to look for a snake charmer.

Later, a pandit picks the snake easily while Manorama makes up her mind that she will punish Pushkar if he does anything to Rajjo again.

In Thakur's mansion, Arjun descends the stairs smelling the weird smell and thinks Rajjo has again burned something.

However, he gets shocked to see the hall filled with smoke and Rajjo looking at him intoxicated.

She looks at him through her dupatta, walks to him slowly and blows the smoke at him while he closes his eyes gently.

Arjun holds her hand and pulls her closer and she touches her nose with him smiling.

He takes the incense pot from her and pulls her closer desperate for her touch.

They look into each other's eyes with lust and he lays her on the table while she touches his beard gently.

Arjun holds Rajjo's head and asks her why she is doing this to him and making him crazy in her love.

He informs her that his race beats faster and his brain stops working when he sees her.

Rajjo grabs his collar tightly and closes their proximity while he accuses her of doing black magic on him.

Arjun pulls her lips near his and states he doesn’t want to do anything which is not associated with her.

He confesses his love and their lips are about to touch when the telephone bell rings.

© Copyright tellybest.com, 2022, 2023. All Rights Reserved. Unauthorized use and/or duplication of any material from tellybest.com without written permission is strictly prohibited.
Cached Saved on: Wednesday 25th of January 2023 06:01:47 PMCached Disp on: Sunday 5th of February 2023 03:38:00 AM