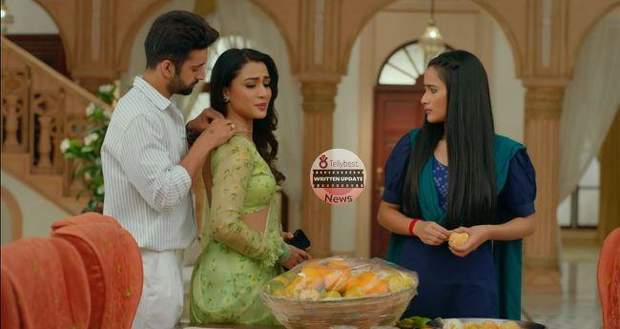 Today's Rajjo 9th November 2022 episode starts with Arjun leaving Rajjo outside in the storm without giving her a second glance.

Rajjo falls to her knees in exhaustion and screams out Arjun’s name as to why he is acting so weirdly with her.

Somehow, Rajjo convinces herself that Arjun has changed and is determined to win against him for the money she needs for Manorama’s treatment.

The next day, Rajjo meets a certain person in the market who introduces himself as a coach while talking to Kaka.

Kaka tells her that the doctors are not visiting Manorama anymore as they are demanding money constantly.

The coach asks Rajjo if she was preparing for a marathon at night and offers to help her by giving tips and reference videos.

Rajjo thanks the coach and asks him why he is helping her with her running.

The coach replies that his daughter wanted to be a sports star but died in an accident on her way to the training center.

Her last words to him were that he should help all those who need resources to become athletes.

As the coach tells Rajjo to wear shoes while running, she stares at her bare feet and realizes she does not have shoes.

Meanwhile, Madhumalti and others spot Chirag sleeping in the living room in a drunk state and wonder why he started to drink again.

Rajjo returns from the market carrying two heavy bags of vegetables while the family members taunt her for getting exhausted after carrying that little weight.

Arjun removes the bags from Rajjo’s hand and head and tells her that he has good news for her.

As Rajjo asks Arjun what the matter is, Arjun reveals that he has preponed their race to this day instead of two days later.

Rajjo gets shocked to hear Arjun’s statement as she has not prepared anything for the race and is exhausted after not sleeping the whole night.

Arjun tells Rajjo that things will go on according to his wish and he does not bother about things like humanity toward her.

Rajjo also accepts Arjun’s proposal and says that she will make his ego kneel before her after winning the race.

After going to a room, Rajjo cries in agony but gets motivated after spotting Manorama’s gold medal.

Later, as Rajjo gets tired of doing the household chores, Chirag gives her a booster drink to get instant energy while Sia gives her a customized shirt.

Rajjo feels motivated on seeing people wishing her luck while Arjun also gets ready to run against Rajjo and make her lose.

© Copyright tellybest.com, 2022, 2023. All Rights Reserved. Unauthorized use and/or duplication of any material from tellybest.com without written permission is strictly prohibited.
Cached Saved on: Monday 21st of November 2022 11:15:43 AMCached Disp on: Thursday 1st of December 2022 03:15:16 AM