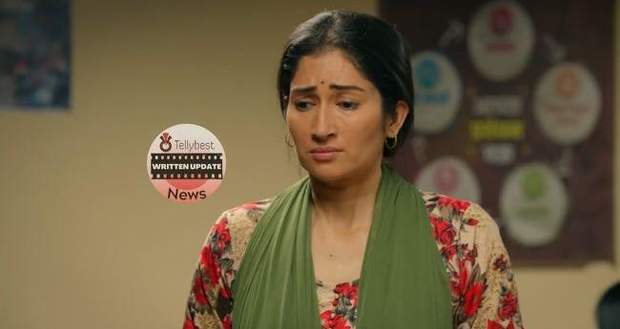 Today's Rajjo 9th September 2022 episode starts with Arjun asking Rajjo if she trusts him while she throws the medal toward Arjun exclaiming he doesn’t have any idea how much she trusts him.

Meanwhile, an exorcist asks Arjun to cut the pumpkin to see the colour whether it's yellow or red.

Seeing the red colour on the pumpkin everyone gets scared while Pushkar is having difficulty breathing in the room.

Meanwhile, Rajjo hears haggard breaths and Pushkar’s inhaler gets thrown towards the wall.

Desperate to breathe Pushkar tries to crawl but loses half-consciousness.

On the other hand, Arjun reveals the truth about the fraud exorcists and the exorcists run away when Pratap picks up the knife.

Meanwhile, Rajjo picks up the inhaler and gives it to Pushkar as she doesn’t know how to operate it.

Pushkar sees the blurry image of the person and uses an inhaler to fill his lungs with air.

Meanwhile, Madhumalti apologises to Arjun for calling an exorcist but assures him that her worries are real.

At the same time, Rajjo slams a flower pot on the ground floor to signal Arjun about Pushkar but the whole family runs towards the first floor.

The family gets worried seeing Pushkar unconscious while Rajjo prays to god to save him.

Later, Pushkar gains consciousness while the Thakur family surrounds him.

Pushkar expresses his gratitude to the girl who helped him in his Asthma attack while the Rathore family gets shocked.

Arjun's breath hitches at the idea of Pushkar knowing about Rajjo.

Later, Pushkar asks Arjun about the girl’s identity while Arjun tells him he knows her.

Arjun tells Pushkar about him helping Rajjo find her mother and shows him Manorama’s medal and asks for his help.

Meanwhile, Pushkar's eyes get wide seeing Manorama’s medal and recalls kicking her out of the academy when she was pregnant.

On the other hand, Manorama is walking on the road holding her potli tightly while Kavita and Bunty are driving on the same path.

Meanwhile, Pushkar thinks Rajjo is her daughter and Arjun brings her into the room to meet Pushkar.

On the other hand, Bunty doesn’t listen to Kavita and uses his phone while driving and crashes into Manorama.

In Thakur’s house, Pushkar confronts Arjun for hiding Rajjo in his house for so many days and exclaims he had met her on his Sangeet.

Afterwards, Arjun pleads to Pushkar to help Rajjo find his mother while Rajjo sits on his knees begging him.

However, glaring at Rajjo and Manorama’s medal Pushkar assures Arjun that he will take care of them.

© Copyright tellybest.com, 2020, 2021. All Rights Reserved. Unauthorized use and/or duplication of any material from tellybest.com without written permission is strictly prohibited.
Cached Saved on: Friday 30th of September 2022 11:58:33 PMCached Disp on: Saturday 1st of October 2022 01:28:03 AM