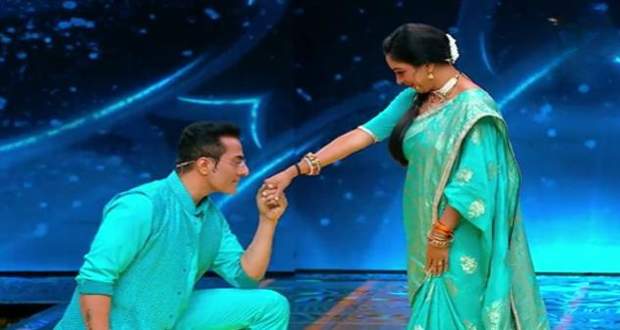 Today’s contestants are team Anupama and team Ghum Hai Kisi Ke Pyaar Mein. Both the team are confident and ready to defeat each other.

In this show, the team that will win the maximum money will be declared Star Plus's Best Parivaar.

In this round, both the team will have to guess a song performed by a member of a Star Parivaar. Patralekha from Ghum Hai Kisi Ke Pyaar Mein was called for this round to give clues to the GHKKPM team. Later, Mama Ji from Anupama comes to provide clues to the Anupama team.

After giving tough competition to each other team Ghum Hai Kisi Ke Pyaar Mein won the round. Team GHKKPM gets the chance to go to the bank to select a suitcase worth fifty thousand or less. Patralekha went to the bank and selected the suitcase worth Rs 0.

In this round, the contestant has to guess the song based on the pictures shown in the mixer machine. It is a buzzer round.

Both the team performs with enthusiasm and gives tough competition to each other. Anupama family won the round and gets the chance to go to the bank. Baa went to the bank and brings back with her a suitcase worth 1 lac.

In this round, the contestants have to guess the song from the jumbled word of a song.

It is a buzzer round and if the team fails to guess the song after pressing the buzzer then it will get passed to another team to make a guess. The competition was tough and both the team showed great sportsmanship.

However, Team Anupama won the round and gets the chance to go to the bank. Anuj went to the bank and selected the suitcase worth Rs 2 lacs.

Team Anupama became the winner of the round and won 3 lac rupees in all.

With the release of its first episode last week, the family show Ravivaar with Star Parivaar has gained viewers’ immense love by entertaining them.

All the Star Parivaar families will be coming together again on the stage of RWSP on 19 June 2022 to have another night full of fun and entertainment.

As per the latest promo of the show, the audience is in for a fun ride with the Anupama family as the two of its members will be swapping each other’s roles.

Anuj will portray himself as Vanraj and show dictatorship on Anupama while Vanraj will be seen getting romantic with Anupama and reading and singing poetries for her.

There will be a mixed combination of games and dance/singing/acting performances that will make the episode one of those, as they say, ‘Paisa Vasool episode’.

Get ready to make this Sunday (19-6-2022) full of entertainment, lessons, and laughter with Ravivaar with Star Parivaar available to watch on Star Plus at 8 PM.