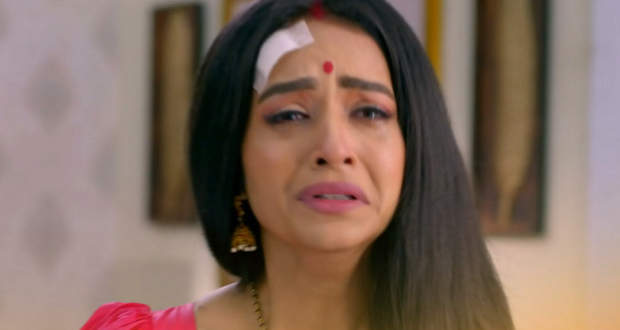 Arjun narrates the story of him catching Diya while she planned to sell the original jewellery and replace it with the duplicate one.

Betrayed, Madhuri takes Diya to another room and confronts her about the matter.

Diya accepts her mistake saying that she had become acquisitive seeing the jewellery. Thus, she had planned to sell it and give the money to her parents.

Madhuri tells Diya that she has started accepting as her daughter but now she is ashamed to even call Diya her daughter-in-law.

Later on, when Madhuri leaves, Niharika calls Tina and handover the phone to Diya.

On call, Tina remembers the moment when she had replaced Pihu (duplicate Diya) with the original Diya by blackmailing Diya with her father.

Tina reminds Diya that Diya has to make Arjun divorce her within seven days and also warns Niharika to be alert around Diya.

Meanwhile, Madhuri goes to Arjun's room to talk to him.

There, Arjun taunts Madhuri for being there to take Diya's side which Madhuri denies.

On the other hand, Kush doubts if Diya was facing some kind of problems which has caused such a change in Diya's behavior but Niharika manipulates his thoughts before he could have thought any further.

Niharika leaves Diya in her room. Diya starts sobbing over her pathetic life.

Diya calls her mother and asks for her father. Her mother repeats the same words as Tina and Diya breaks down.

Further on, Diya goes to Arjun's room where she sees him struggling to stand up.

Arjun has almost fallen due to his imbalance but Diya catches him.