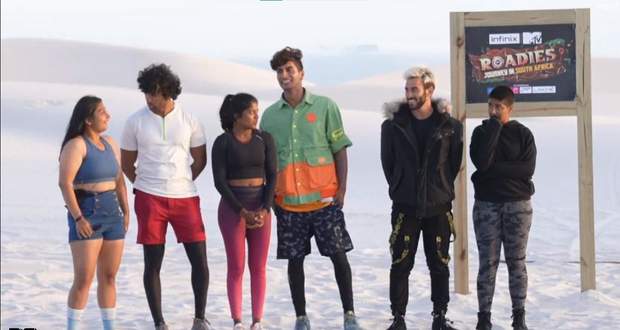 Today's Roadies 18 10th July 2022 episode starts with the roadies getting mixed feelings seeing the ex-contestants as some of them were friends while others were foes to individual contestants.

Sonu Sood asks the ex-contestants whom they support and wish to win which leads to revelations of some friendships that have turned bitter.

Further, Sonu reveals to the finalists that they can buy help from ex-contestants by giving their roadiums to the desired ex-contestant.

However, each ex-contestant will have a particular amount while there is another time advantage of 15 seconds for 500 Roadiums.

Sonu informs the finalists that they will be competing for the title in a four-staged task.

In the first stage, the helping contestants will make a giant sandwich for their opponents and the finalists will have to complete the whole sandwich in the least time.

In the second stage, the finalists will have to roam around the bay area and click pictures of five live-sized animals near the clock tower.

In the third stage, the finalists will have to go to the green market square and segregate the tiny colored balls from the jar into individual colors. However, only one buddy partner from the buddy pair will have to do it alone.

However, the fourth stage will be revealed by Sonu later in the task after completing the first three tasks.

In the first stage, Ashish-Nandu manages to complete the whole sandwich first and rush to the location of the second stage while Kevin-Moose follow after them. Jash-Yukti are the last ones to move on to the next stage.

In the second stage, Ashish-Nandu again manage to top others and rush to the green market square while Kevin-Moose and Jash-Yukti become almost neck-to-neck.

In the third stage, Nandu manages to segregate the tiny ball and rush to call Sonu for the fourth stage. Meanwhile, Jash-Yukti manage to overcome Kevin-Moose and gets to call Sonu before them.

In the fourth stage, Sonu Sood informs the finalists that they will be doing a race track with a lot of twists and turns.

From the buddy pairs, one will be driving and while being blindfolded and the other buddy pair will navigate the driver.

However, the car will be pushed by the helping ex-roadies as the car doesn't have a working engine.

Aashish-Nandu complete the task beautifully while Yukti-Jash and Kevin-Moose have difficulties as they had female helping ex-contestants which weakened their speed due to less muscle strength.

Sonu informs the finalists and the ex-contestants to reach the final location to get the results and find out who are the winners.

After reaching the final location, Sonu informs the timing of the contestants with the time advantages added in.

Jash-Yukti completed the whole task in 28 Minutes and 8 seconds.

Kevin-Moos completed the task in 31 Minutes and 29 seconds.

Aashish-Nandu completed the task in 19 Minutes and 18 seconds making them the ultimate champions of Roadies: Safaring In South Africa Season 18 2022.

Finally, Sonu gives the prizes and 10 Lakh Money to Aashish-Nandu and they all celebrate the end of the show.