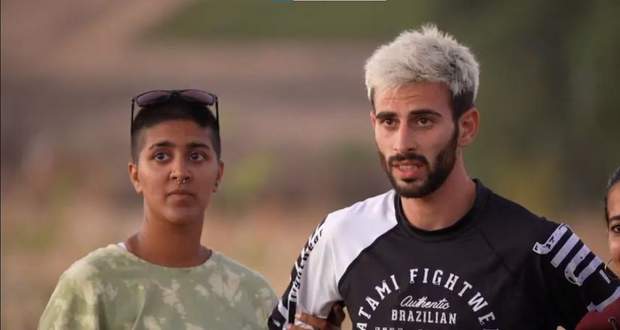 Today's Roadies 18 11th June 2022 episode starts with Arushi Chawla falling and getting injured while Kevin Almasifar and Sakshi Singh run to check on her.

Arushi again gets on her bike and completes the task with Kevin cheering her all the way.

The rest of the buddy pairs complete their tasks and end the task.

Arushi tells the roadies how she feels discouraged by her own action and is grateful to Kevin and Sakshi for cheering her up.

Sonu asks them in which buddy pair's timing they want to add 10 more seconds and they all give their responses.

Sonu further surprises them by saying that the pairs getting advantages are also given 500 Roadiums.

The next morning, the roadies get a message telling them the first round of their task.

The roadies have to translate the given words to Hindi and later reach the location task.

However, at the location, Baseer Ali-Soundous Moufakir also arrives which shocks the contestants.

Sonu informs them that Simi Talsanaia-Gaurav Alugh has won the first round of the task and are awarded 500 roadiums.

Sonu tells Sohil-Sid that they are second and have the advantage to choose teams.

Afterward, Sonu informs the roadies of the details of the task named 'Barreli Ki Barfi' and makes teams.

Team A starts the task and Kevin swims without a life jacket which leads to him having difficulties in returning to the ground from the river.

In the last round, the team collects only 500 grams of grapes instead of the desired 1 Kg.

Team B started the task and Gaurav starts swimming but starts drowning while returning.

He gets rescued and is medically treated while the task continues and in the end, they collect 700 grams of grapes.

Lastly, Sonu reveals that Team A has won the task and informs them that two pairs will get immunity and one pair will get roadiums.