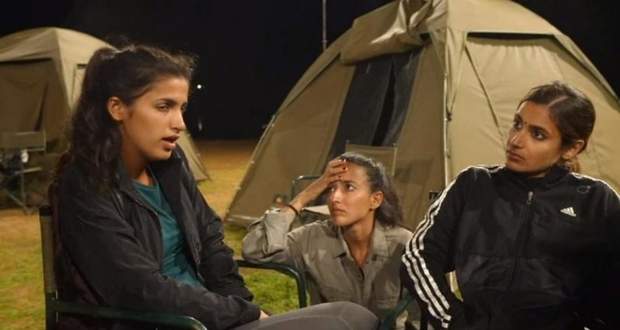 Today's Roadies 18 13th May 2022 episode starts with Sakshi Sharma and Aashish Bhatia getting into an argument.

During the argument, Sakshi angrily claims that Aashish disrespected her while he retorts that he was just trying to motivate her.

Later Aashish claims that Kevin Almasifar and others are trying to brainwash Sakshi.

However, Kevin is trying to convince Arushi Chawla that Yukti Arora will go against her on the other side of the camp.

Sonu Sood announces that today ex-roadies will vote out one pair while new roadies will save one pair.

Yukti thinks of voting against Arushi and informs Arushi about it hurting her feelings.

When Yukti tries to justify herself, Arushi ignores her and storms out from there.

Sonu questions Arushi about her mood while Arushi and Yukti again get into an altercation at the vote-out location.

Finally, in the end, Yukti writes Arushi’s name for elimination.

Further, Sonu asks Soundous Moufakir why she gave her Roadiums to Nandani G., not Yukti, she says that it is because Yukti wrote her name for elimination last week.

Later, Yukti explains that it is not easy for her to start a conversation with Kevin and Arushi again.

However, Arushi replies that she is the one who asked Kevin and Soun to support Yukti and now she regrets it.

In the end, Sahil Jhuti and Simi Talsania vote against Arushi and Arsh Wahi.

When Sonu announces Sahil and Simi’s names next, Simi says that she knew that they will get voted out.

Arushi votes against Simi stating that she creates a mess in the show.

Kevin reveals his feelings for Arushi

Kevin thinks to give his immunity to Arushi and asks Soun if he can give his position to Arushi.

Kevin thinks that he wants Arushi to stay as she has finally started playing the game.

Feeling confident, Kevin reveals to everyone that he has romantic feelings for Arushi.

In the end, Arushi stops him and gives him all of her Roadiums which are 1000 Roadiums.

To get to know more, download Roadies Season 2022 all episodes or watch MTV Roadies 19 online today's (13 May 2022) latest full episode, go to voot.com