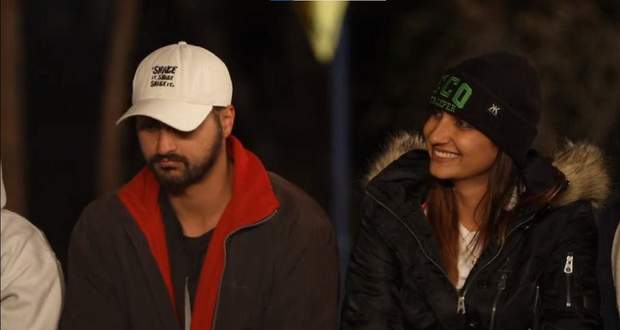 Today's Roadies 18 21st May 2022 episode starts with Aarushi Dutta and other roadies sitting around and talking about the current game plans.

Meanwhile, Yukti Arora and Nandini G. are worried wondering if they will be targeted in the vote-out as they are nominated for elimination.

Baseer Ali calls out Kevin Almasifar for betraying him again and saving Sapna Malik instead of Moose Jattana and Gaurav Alugh.

The next morning, Baseer tells Kevin that he cannot play with him anymore while Soundous Moufakir also argues with Baseer while trying to save her buddy.

Afterward, the roadies again get on their bikes and make their journey towards their next campsite, Matjiesfontein.

However, the roadies see Sonu Sood waiting for them and no tents in sight.

The roadies fear that the vote-out will happen then and there only while Sonu calms them and tells them to sit down.

Sonu asks them about their emotions while Baseer reveals that he feels betrayed by Kevin.

However, still feeling pretentious, Kevin says that he thinks what he did is not wrong as he saved his friend Sapna.

Baseer says that most of the roadies are against Kevin as he is the one with the problem, not them.

Aashish Bhatia tries to speak for Baseer but Kevin keeps interrupting and belittling him.

Sudden Vote-out with a Survival task

Dismissing the arguments, Sonu announces that the buddy pair which will get the most votes in the vote-out will fight in the survival task against Nandu-Yukti.

Sakshi Singh goes against the plan and votes against Aarushi which angers her.

At the end of the vote-out, Sapna-Angad Bawa is the most voted which leads to them fighting against Nandu-Yukti in the survival task.

Kavya and Baseer reveal that Sapna-Angad gives negative vibes to everyone else while Aarushi reasons that it's because Sapna doesn't take the first step to converse with other people.

Lastly, Sonu tells them that they will be competing the next day in the survival task against Nandu-Yukti and bid them goodbye.

To get to know more, download Roadies Season 2022 all episodes or watch MTV Roadies 19 online today's (21 May 2022) latest full episode, go to voot.com

© Copyright tellybest.com, 2022, 2023. All Rights Reserved. Unauthorized use and/or duplication of any material from tellybest.com without written permission is strictly prohibited.
Cached Saved on: Wednesday 25th of January 2023 03:53:12 PMCached Disp on: Sunday 5th of February 2023 12:19:18 PM