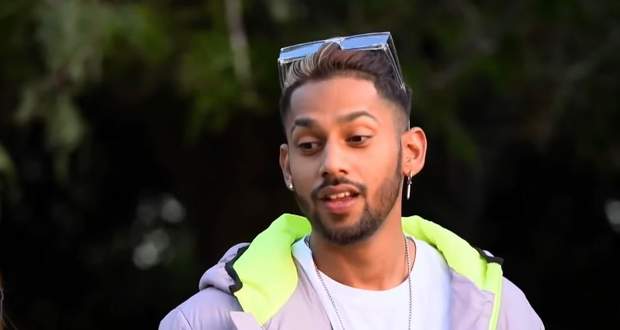 Today's Roadies 18 24th April 2022 episode starts with the roadies having fun with each other as they dance and sing at their campsite when some African tribal people come there and start dancing and singing with them.

The dancers give them a phone in which Sonu Sood greets them through a video call and informs them of the task in which they have to match the steps with the African dancers to go to the task location.

The losing buddy pair will have to stay back at the campsite.

The task starts and the buddy pairs start getting selected and leave for their task location while Arushi Chawla and Arsh Wahi lose and stay back.

Sonu shows them a bunch of figurines on the table and tells the roadies that they will have to rearrange the jumbled figurines in their original order to complete the task.

Baseer Ali goes first while Yukti Arora sees him floating in the air on the screen and feels a little bit scared.

Kevin goes next and Sonu calms him knowing that he has a fear of heights while Kevin tries to encourage himself saying that he is getting a chance to overcome his fear.

Afterward, it is Yukti’s turn who feels panicked at the thought of jumping from the bridge but does it nonetheless and comes out successful.

All the roadies complete bungee jumping after which they convince Sonu Sood to bungee jump too as a part of the adventure.

The roadies go back to their place and start their task of rearranging the figurines on the table to their original place.

Sonu Sood reveals that the time they took to reach the task location from their campsite will also be counted and announced Baseer and Jashwanth Bopanna as the winning buddy pair.

Baseer and Jashwanth feel happy getting the immunity while Sonu rewards 500 roadiums to Gaurav Alugh-Moose Jattana and Sohil Jhuthi-Simi Talsania as they did the figurine task earliest.

Baseer-Jashwanth win a hamper from Pari Sanity Pads and they gift the hamper to Nandini G.