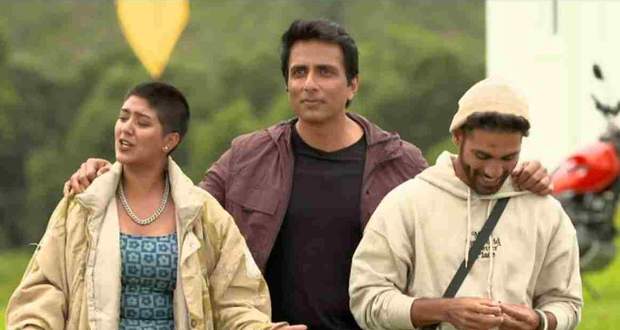 Today's Roadies 18 29th April 2022 episode starts with the happy chatter of all the contestants as they are rewarded with coffee.

But the smiles turn to frowns soon enough as they revive their first message and are called for the vote out right away.

All the contestants begin to plot and plan as they all try to save their own and their friends' necks.

Moose feels Baseer's attitude change in front of her eyes.

Everyone gets ready and meets Sonu Sood at the location.

The power is that both the buddy pairs can join hands and make one non-immune buddy pair immune.

The non-immune buddy pairs pitch for themselves and their friends.

Basser takes a pole to determine the heart of the other contestants and asks Sonu the consequences of the immune pairs not coming out with a decision.

The real bomb drops when Sonu tells them that if the immune pairs don't conclude then they will lose their own immunity.

Basser strikes a deal between all the buddy pairs that they will provide immunity to Aarushi only if the others agree to not put Moose and Gaurav's names up for elimination.

Exhausted, Kavya tells Baseer that they will play their own game.

All the contestants begin creating a ruckus and don't seem to be coming to a conclusion.

Sonu tells them that they are flooding their immunity along with precious time.

Finally, Baseer announces that both the immune buddy pairs have come to a collective conclusion to provide the immunity to Aarushi.

Nandu's advantage states that she will be allowed to give a buddy pair two open votes. Everyone deposits their votes and Sonu reveals them one by one.

With vote after vote, Baseer's trust gets shattered as even after the deal contestants backstab him.

Gaurav and Moose run a neck-to-neck fight against Sohil and Simi as the end buddy pair is saved by one single vote.

Moose Jatana and Gaurav Alugh are voted out of Roadies 18.

With Moose and Gaurav's departure, Baseer's friendship departs too, only to be replaced by anger.