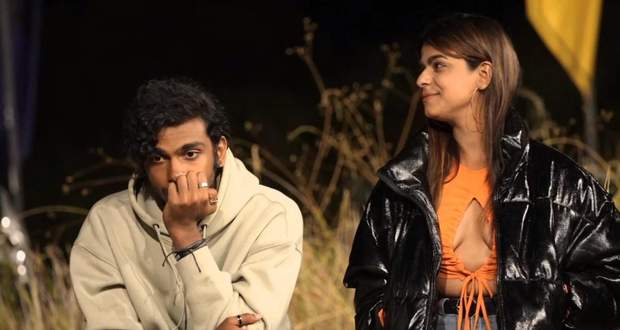 Today's Roadies 18 4th June 2022 episode starts with Baseer Ali and Soundous Moufakir sitting together while Sohil Jhuti informs the viewers that Baseer and Soundous are in a relationship now.

Afterward, at the camp, Sonu Sood greets them and reveals that immunity is going to be auctioned off starting with 500 roadiums.

Many contestants get worried while Sonu reveals that they can also borrow money from other roadies.

However, Soun-Kevin still wins the immunity by bidding 2100 roadiums leaving them with only 900 roadiums remaining.

Afterward, Sonu reminds them that Kevin-Soun, Aashish-Sakshi, and Baseer-Jashwant Bopanna are immune while the rest of the roadies are in a danger zone.

Giving another shock, Sonu reveals that in this elimination, they will be eliminating one ex-roadie and one new roadie irrespective of whether they are a buddy pair or not.

After the vote-out is done, Sonu reveals the name of the most voted new roadies first and takes the name of Nandu and Tanish.

Sonu tells them that they will decide upon that later and goes on to reveal the name of the ex-roadies which is also a tie between Yukti and Kavya Singh.

At last, Sonu makes a revelation that the last four votes in new roadies were in Tanish’s name, and for ex-roadies, it is Kavya.

Both Kavya and Tanish bid goodbye to the rest of the roadies and make their exit while Arushi cries feeling guilty.

Sonu gives the roadies a chance to shuffle their buddy partners

Afterward, Sonu makes the remaining roadies sit down again and tell them that they are given a chance to shuffle their buddy partners as the future games are going to be even harder.

Ashish reveals that he wants to pair up with Sid which is accepted by Sid leaving Arushi Dutta alone.

Sonu tells her that he has a solution and reveals the reentries of Moose Jattana, Gaurav Alugh, Arushi Chawla, and Arsh Wahi.

Gaurav starts confronting the roadies and gets into an argument with Siddharth Manoj and Ashish.

Arushi C. also argues with Yukti and says that Ashish is a snake which Gaurav agrees with.

In the end, Sonu informs the roadies that they are given the night to think if they want to shuffle their buddies and that Gaurav-Moose and Arushi-Arsh can’t be buddy pairs.