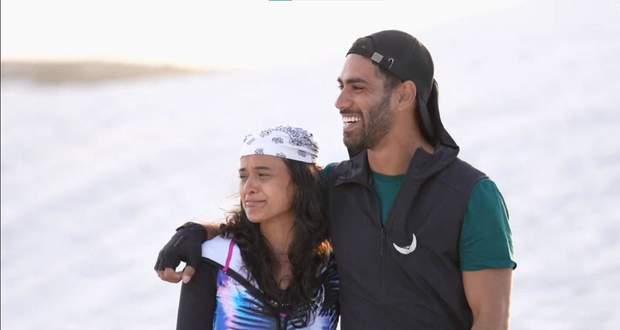 Today's Roadies 18 9th July 2022 episode starts with Kevin Almasifar-Moose Jattana telling Gaurav Alugh-Simi Talsania to do their best as they want them to reach the finale.

Afterward, the roadies get a message and they reach their next task location which is Atlantis Dunes.

Sonu Sood greets them and congratulates them for racing the grand finale while informing them that they will be Quad biking for their task today.

The roadies get excited when suddenly Sonu surprises them by revealing that today's task is an elimination task.

The roadies get worried while Sonu explains the task route that they have to complete with three checkpoints having different tasks.

Further, Sonu reminds them that Gaurav-Simi have won an advantage from winning the previous task and tells the said pair that they have an advantage of 1 minute.

All three pairs consisting Gaurav-Simi, Jashwanth Bopanna-Yukti Arora, and Aashish Bhatia-Nandini G. complete their task with enthusiasm while they worry about the result as Simi-Gaurav have an advantage.

Sonu states the timings of the pairs and reveals that the Aashish-Nandini have won the task and are going to the finale.

Further, anticipating who will be eliminated, Sonu reveals that even with an advantage, Gaurav-Simi have lost and gotten eliminated.

Jash-Yukti get stunned as they realize that they have become a part of the finale and hug each other while others console Gaurav-Simi.

The roadies bid goodbye to Simi-Gaurav as they exit the show.

The roadies reach their campsite where everyone enjoys a taste of victory as they know they have reached the finale.

A Sweet Surprise for the Roadies

The next morning, the roadies wake up in a good mood and the mood gets even better when they get a message that they are given the opportunity to video call their family.

Kevin gets emotional as he realizes that he had an argument with his mother before coming for the show while Moose tells him that everything will be fine.

Meanwhile, other roadies call their family members and have an emotional moment as they inform them that they have reached the finale of the show.

Happy news for Nandu and Jash

Nandu and Jash both inform their parents about each other and that they are both in the finale while the family makes them happy by informing them that they accept their relationship.

The final journey of the season

Later, the roadies start their last bike journey toward their final task location.

However, Kevin and Moose fall from the bike and get minor injuries but continue their journey toward the task location.

Sonu greets the finalist roadies as they all reach the task location and informs them that this is the last race for them to get the trophy and the title of Ultimate Champions.

Sonu once again tells the roadies that he has a surprise for them and calls out to visitors who are revealed to be the ex-contestants of the season.

© Copyright tellybest.com, 2022, 2023. All Rights Reserved. Unauthorized use and/or duplication of any material from tellybest.com without written permission is strictly prohibited.
Cached Saved on: Friday 27th of January 2023 10:27:16 AMCached Disp on: Monday 6th of February 2023 06:56:20 PM