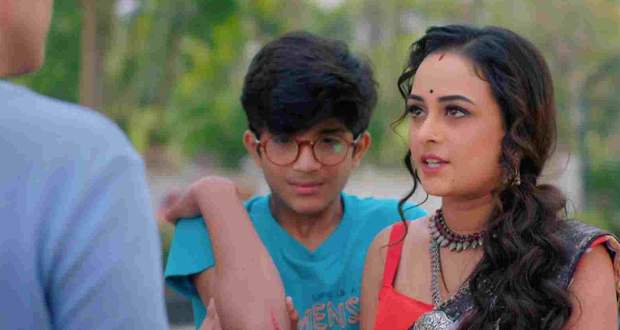 She decides to act nicer in front of Abhay and prepares a hearty breakfast for him.

Abhay asks her how did she know about Abhay’s favorite food picks? Gehna replies that her memories dictated her meal prep in the morning.

Both Abhay and Gehna later go out on a drive as a part of their wedding anniversary celebration.

Gehna tells him to stop the car as she has to buy some things from the pharmacy. Abhay insists that he must accompany her.

However, Gehna informs him that she will be back in a minute.

Leaving Abhay busy on a call, Gehna frantically asks the man at the pharmacy to tell her about a pill.

Gehna hands him the medication Abhay gives to her.

But Abhay comes out of the car to pick Gehna up, making Gehna lose this precious opportunity to fetch information about the medication.

During the night when Abhay is fast asleep, Gehna picks up his phone and goes to the bathroom.

She searches for the medicine. Just then Abhay knocks at the bathroom door and asks Gehna what she’s doing inside.

Silenced by fear, Gehna opens the door and hides his phone under her foot.

The next day, Gehna serves Abhay and his family breakfast.

Abhay informs Gehna that he will be leaving in a while.

Before that, he gives Gehna, her mother, and Priya the same medication as before. Not wanting to swallow it, Gehna intentionally breaks a glass jar, demanding Abhay’s attention.