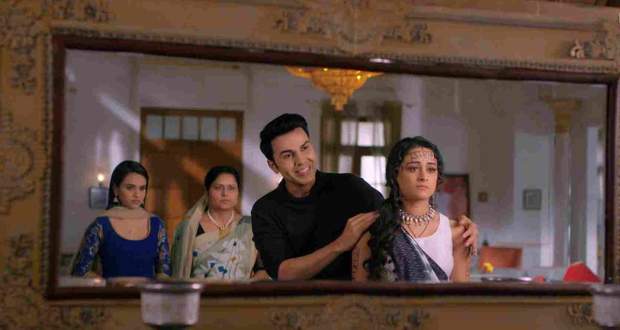 He now decides to keep a keen eye on Gehna, his mother, and Priya.

After breakfast is over, Abhay hands out the medicine to all three of them. But as decided, Gehna, Abhay’s mother, and Priya do not take their medication.

However, Abhay notices his mother’s closed fist and asks her to open it fully.

Just in time, the doorbell rings, and Abhay’s attention is seized by it.

Upon opening the door, a group of singing women enters Abhay’s house.

Anant has also disguised himself as a woman to take entry into Abhay’s house. Anant decked as a woman, takes Gehna aside and reveals his face to her.

Gehna shows him a room to hide and joins Abhay in the living room, seeing off the women politely.

Later, Gehna goes to the room where Anant is hiding and both of them share a promising conversation.

But as fate would have it, Abhay enters the scene and leaves Gehna petrified.

Abhay questions Gehna and the latter makes an excuse that she was here to retrieve a blanket.

Before Abhay leaves for Anant’s house, he tells Gehna that he does not like Anant and will do kill him ultimately.

Gehna gets scared and tries to reason with Abhay.

However, the latter pushes her onto the sofa and marches off.

Later, Gehna introduces Anant to Abhay’s mother, Priya, and Rohan. Rohan immediately feels a familiar connection with Anant and ends up hugging him.

Anant promises all three of them that he will get them out of this toxic situation.

Upcoming SNS2 Updates: Gehna gets glimpses of her memories back.