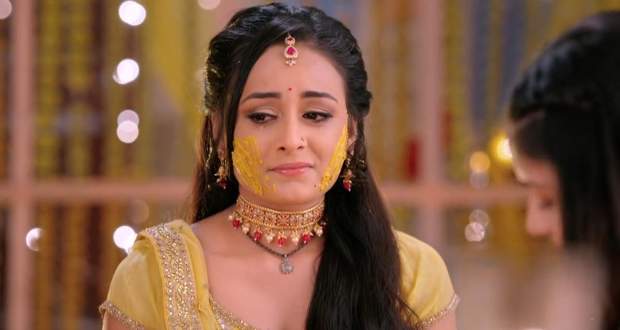 Radhika assures him that she will return with her parents and they share a romantic moment.

Meanwhile, Hema and Hiral are complaining about working in the kitchen while Kanak reveals her plan of putting the leaves of the itching plant in Gehna's bowl of Haldi.

Kanak goes into the garden to take the itching leaves and Anant spots her but she makes excuses and hurries to the kitchen.

Later, Hema gets distracted by food and mixes Gehna's bowl of Haldi with their bowl.

Hema puts the bowl near Gehna's feet and the Haldi ceremony starts.

Later, She, Hema, and Hiral put the Haldi on their body from their bowl and suddenly start itching.

Baa acknowledges them and Hema is about to reveal their plan but Kanak covers it up and glares at her.

Gehna tells Alpa to bring Neem paste for them after which their husbands put the paste on them.

Manish and Jyoti enter the house with Gehna's Aunty which Gehnas makes surprised to see their relatives from the village.

Tia puts water on Gehna's head in bathes her as a part of the ritual while Sagar watches her from afar.

© Copyright tellybest.com, 2020, 2021. All Rights Reserved. Unauthorized use and/or duplication of any material from tellybest.com without written permission is strictly prohibited.
Cached Saved on: Tuesday 8th of June 2021 11:51:57 PMCached Disp on: Wednesday 16th of June 2021 07:46:53 AM