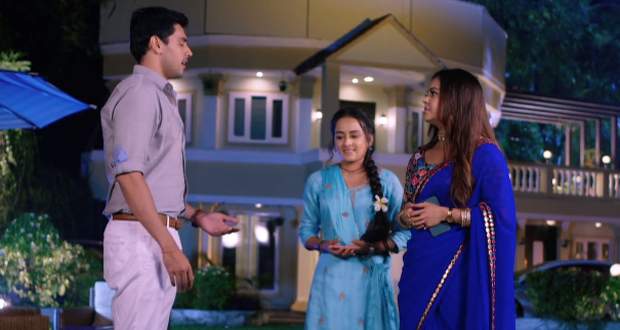 Today's Saath Nibhaana Saathiya 2 (SNS2) 11 Nov episode starts with Anant asking Gopi about Ahem. Gopi states that Kokila can at least have her son back. Kanak witnesses the conversation and wonders about Gopi’s intentions.

She decides to plan something big against Gopi. Meanwhile, Gehna wonders if they can ask something from Guruji.

Anant suggests they can’t ask Guruji in front of everyone. However, Anant and Gehna offer to help Gopi in her mission.

Kanak and others make a plan while Praful gives Shagun to Sanchi, Piyush, and Gehna. Kokila asks Gehna to keep the money and buy books using it.

Gehna takes blessings from Praful and Jamna while Kokila suggests preparing for the arrival of Guruji.

Kanak meets Kokila again and mocks her about Gopi’s betrayal. Kokila doesn’t listen quietly and rebukes her for her words.

Gopi makes a plan with the help of Anant and Gehna and wants Ahem to hear some Bhajan. Gehna asks Gopi Kaka to stay in the house because of some bad time.

Kanak and Hema act of being injured and sick respectively and Jamna asks them to take rest. Hema and Kanak further learn that Praful will surely give something who treats the Guruji well.

Kanak and Hema have made a plan along with Sagar to put alcohol in the Kamandal to get both Anant and Gehna scolded.

Guruji arrives and praises Anant. He further wants to do a tour of the house. Guruji thinks there is a bad omen inside the house.

Meanwhile, Sagar tries to put alcohol while a Shishya of guru taunts him because of his clothes. He asks him to leave the house.