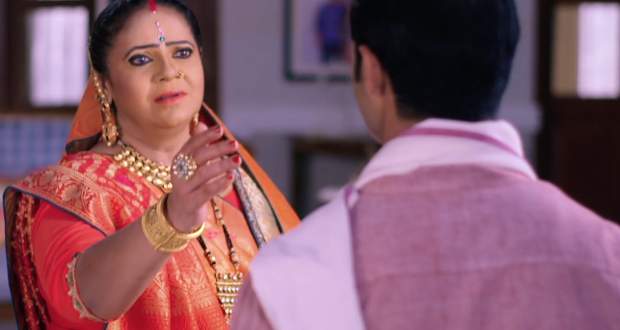 Today's Saath Nibhaana Saathiya 2 (SNS2) 12 Nov episode starts with Guruji performing the Pooja rituals and also gives blessings to everyone in the house. He passes on comments to everyone individually as well.

He says Gehna will have a higher status soon and her whole life will change after Navratri. Hema and Pankaj misbehave while Guruji wishes to leave.

Pankaj and Hema are forced to apologize to make Guruji stay. Guruji asks someone to sing a Bhajan while Anant declares Gopi will sing Krishna Bhajan.

Meanwhile, Kanak is sure their plan will be successful while Sagar puts alcohol in the Kamandal. Further, Gehna and Anant set up the speakers so that Ahem can listen to the Bhajan.

Gopi starts singing and Ahem gets flashes of memory. He gets attracted to the voice and moves in the direction of the music inside the Desai house.

Gehna has to keep an eye on Kokila but has to leave to get the Kamandal. She gets shocked to learn that the Kamandal contains alcohol and wonders how to make things right.

Kokila sees Ahem and gets emotional while Anant and Gopi get worried. Kokila wishes to greet Ahem but he leaves the house.

Kokila follows him while Anant and Gopi also leave the house. Kokila tries to make Ahem remember that he is her son.

Kokila wishes to die if Ahem doesn’t come with her while Kokila comes in front of a truck. Ahem pulls Kokila and saves her life. Kokila asks if Ahem is okay while Ahem addresses Kokila as Mom.