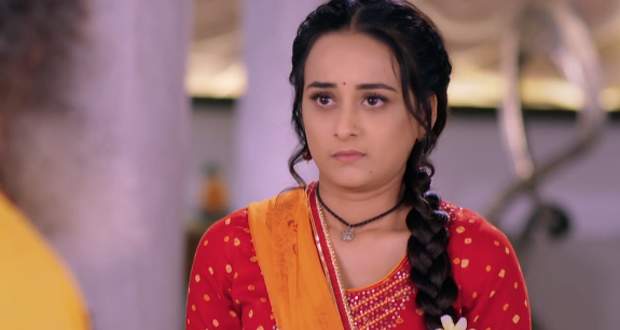 Today's Saath Nibhaana Saathiya 2 (SNS2) 13 Nov episode starts with Kokila getting happy that Ahem called her mom. Ahem tries to remember things and gets flashes of his memory back.

He asks everyone to leave him alone. Ahem refuses to believe that he addressed Kokila as his mother and asks them to go away.

Ahem helps Kokila get up while Anant goes to get water. Meanwhile, Guruji asks for his Kamandal while Gehna is asked to bring the Kamandal.

Kanak and others wonder where Kokila, Gopi, and Anant went. Meanwhile, Ahem leaves Kokila on a bench while Kokila understands about Gopi’s getup.

Gopi further reveals that Ahem and Gehna are helping her in getting Ahem’s memory back. Anant gets upset with Gehna not performing her duty in the plan.

Gehna brings a different Matka and reveals that it is special. Kanak and Hema think Gehna will be scolded but she is praised by Guruji.

Urmila asks Gehna where is the Kamandal while Gehna reveals that it got impure. Urmila is sure that it is Kanak and Hema’s plan.

Gehna asks Jamna about Gopi and Kokila and wonders what happened outside. Guruji declares there is some evil power and suggests Sagar is a bad influence.

He asks Sagar to leave the wrong path. Kokila and Gopi return home while Anant is really mad at Gehna. Kanak gets upset with her failed plan.

Guruji gives blessings to Anant and says he will get a life partner as well and makes Gehna stand with him. Kokila apologizes to Guruji for leaving and asks him to stay for dinner.

Gehna wishes to make food for Guruji while Anant doesn’t want Gehna to help with food. Hema and Kanak realize Anant and Gehna have some trouble in their relationship.

Kanak wants to know what is going on between Gopi, Kokila, and Anant.

Upcoming Saath Nibhaana Saathiya 2 episode update: Anant warns Gehna and threatens to throw her out of the house.

© Copyright tellybest.com, 2020, 2021. All Rights Reserved. Unauthorized use and/or duplication of any material from tellybest.com without written permission is strictly prohibited.
Cached Saved on: Tuesday 8th of June 2021 03:36:45 AMCached Disp on: Wednesday 16th of June 2021 01:38:07 AM